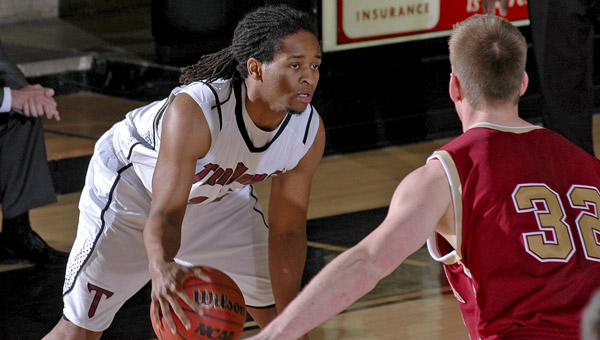 Travis Lee’s senior season did not begin the way he had hoped it would.

Instead of running up and down the court with his teammates, Lee was on the sidelines, leaning on crutches thanks to the surgery that was performed on his right knee before the season began.

During a procedure to remove a cyst, doctors discovered loose bone fragments that had to be removed.

That process meant Lee would be forced to miss significant time early on in the season.

Still, the senior guard worked on, with the hopes of getting back on the court.

Just when he finally did reach the hardwood, the injury would again reappear in late December, forcing Lee out of the game for another two weeks.

“This year has kind of been unexpected,” Lee said Tuesday afternoon.

“The surgery had to get done (this season). But my trainers made sure that I went to treatment everyday and that made a huge difference. The knee is not much better than it was, but it doesn’t bother me as much as it used to which has allowed me to play better lately”

Despite two severe injuries, once again, Lee worked on.

It was not until Jan. 29, at Louisiana-Monroe, that Lee got his first start in over two years.

And he made the most of it.

The senior finished with 15 points against the Warhawks, and helped Troy get its first road win of the season.

Since then, through pain and all, Lee has been a driving force for the Trojans, knocking down key 3-pointers and more importantly, keeping his team in key games down the stretch run of the season.

In the last four games, all of which Lee has started in, the guard has scored a combined 63 points, and connecting on 42 percent of his 3-point attempts.

His biggest night of the year came against South Alabama, when he scored a career-high 28 points.

Because of his efforts last week, the Sun Belt Conference named Lee the Men’s Basketball Player of the Week this week.

The announcement marked the third time this season a Trojan was honored, as Will Weathers and Vernon Taylor won it earlier this season.

“When I found out about it, it caught me off guard. The first person I called was my mom and (the award) definitely means a lot. That’s our third Player of the Week honor this year and it’s a pretty good accomplishment. It kind of sums up that we are not a bad team. We have good players here.”

However with all the accolades and statistics Lee has put up, he posses something greater in his head coach’s eyes.

“I have always been a big believer that you can tell a lot about someone when things are not going their way,” Don Maestri said.

“When he was injured he didn’t stop working, but more importantly, he cheered for the guy who was playing his position (Regis Huddleston). And you could see him on the bench standing and cheering like crazy when a lot of guys would be sitting with a chip on their shoulder. He was pulling for the guy in his position, and that is an unusual trait in this day and time with players – and I think that helped him get to this point.”

Since his first start, the Trojans have gone 3-1, and with just four games remaining in the regular season, including two at home, and Lee said he hopes to see the winning ways continue.

“I think the whole team is still working hard, the guys are still cheering each other on,” he said.

“It’s coming down to the end of the season now. We have to come out and play. I know the last couple of games (at home are going to be pretty tough), because that will be it for me at Troy.”