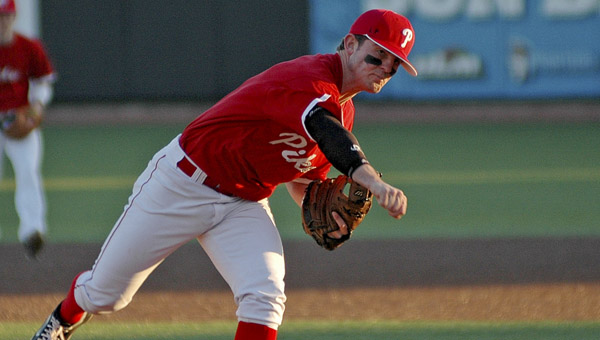 In Monday’s season opener, the Pike Liberal Arts Patriots got a chance to exact some revenge from the pain suffered nine months ago in the AISA state championship game.

Riddle-Pace Field was the site for the Valentine’s Day match up between the Patriots and the Glenwood Gators,

Unfortunately, for the Patriots, the result was the same as it was last May.

With 70 degree weather, there was much for both the Pike Liberal Arts players and fans to be excited about as the game began, however, that was about it, as the Gators got off to an early lead and cruised to a 9-0 victory in the rematch.

On the hill for the Patriots was senior right-hander, Sam Carroll. After hitting the first batter he faced, Carroll found his groove and pitched well throughout the first four innings, striking out four while giving up one run off of two hits.

In the fifth inning, the Patriots turned to their bullpen, and that’s then the trouble began.

Lawson Stewart replaced Carroll, and only lasted two thirds of an inning, giving up five runs off of three hits and four walks.

Facing a 6-0 deficit, Josh Starling was able to get out of the fifth, but in the sixth, the Gators struck again, this time for three runs off of a pair of walks and hits.

“We got to go to work,” head coach Butch Austin said after the game.

“Sam pitched great and I knew that he would. But we have to have more than just Sam. They had one big inning that killed us, but we are going to get there. The next time we play them, I guarantee we are going to play a lot better.”

The Gator pitchers did not face the same kind of problems as the Patriots.

PLAS finished with just three hits in the game, and struck out 11 times, five of which on a called third strike.

The team in red and white also stranded eight runners on base.

“It was obvious that their pitchers have gotten a lot stronger and better since the offseason,” catcher Blake Floyd said.

“We haven’t had the practice we needed (going into the season). We haven’t faced any live pitching at all. But you can’t use that as an excuse. At the same time, we were just coming in here trying to play off of little, easy batting practice. We got to face live game situations and good pitching, or we are never going to get better.

“This is a good wake up call for the players and the coaches,” he added.

Floyd finished with 0-3 with two strikeouts.

The only real Patriots’ threat came in the bottom of the third, when the team was down 1-0, and had the bases loaded however it was unable to capitalize.

Even though the team struggled at the plate, the head coach said he was impressed with how his team played in the field.

“We played good defensively,” Austin said. “That surprised me.

“I thought that would be one of the things we would struggle with. But we played well (in the field). We didn’t hit the ball and other than Sam, we didn’t throw strikes. That’s the name of the game, getting ahead of the batters. The best pitch in baseball are those first pitch strikes and we just didn’t get them (Monday).”

Robert Benton, Nick McLaughlin and Evan Strother were the only players to reach base safely, as both Benton and Strother had singles while McLaughlin had a triple.

Benton’s single broke up a no-hitter in the third inning.

The top four Patriot batters combined to go 2-for-12 at the plate.

“We are going to be alright,” Austin said.