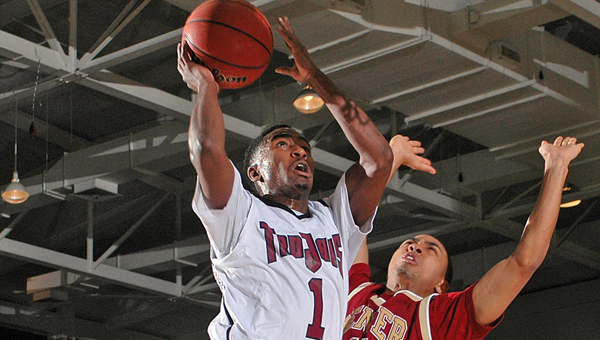 Troy University's Will Weathers (1) goes up for a shot against Denver's Kyle Lewis (11) during an NCAA basketball game in Troy, Ala., Saturday, Feb. 12, 2011. (Messenger Staff Photo/Thomas Graning)

Sartain Hall continued to be a house of horrors for the Denver Pioneers.

Even though the score was tied after the first 20 minutes of play, Troy was able to pull away from the current Sun Belt Conference West Division leaders late in the last 20 minutes, going on to a nine-point win, 64-55.

“They were given a game plan (on  Friday) and with all the teams that we have had play Denver, this team tonight executed a game plan the way we think you have to have  if you want a chance to succeed against Denver. They did it better than any team at Troy has ever done.”

The win was the Trojans’ second in-a-row, and improved the team’s record to 7-17 overall, and 5-7 in conference play.

“They were so focused and played so well in practice on Friday, and then came out tonight and backed up all the things we had worked on,” Maestri said.

All throughout most of the game, both teams battled back and fourth, with neither taking hold of a substantial lead. Denver’s largest lead of the night was just five points.

After a Pioneer 3-pointer cut Troy’s lead to 45-42 with around nine minutes left in the game, the Trojans took control, going on a 13-4 run in five-minute span, that all but sealed the victory.

Guards Will Weathers and Vernon Taylor played key roles in the big victory. 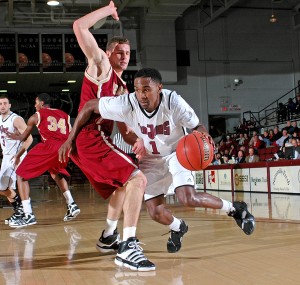 Weathers finished with a double-double, finishing with game highs in both points, 19, and rebounds, 10.

“I had a good week of practice and coach told us to drive, and I love to drive. I just played to my advantage. My family was watching the game, including my son for the first time in a while. I just wanted to put on a show for them. And I guess that’s what I did.”

Despite missing the final 12 minutes of Troy’s win over South Alabama Thursday night, Taylor came back with vengeance, scoring 18 points on 6-of-9 shooting in 34 minutes.

But while he made several acrobatic shots look easy, the senior said he was making them in some considerable pain.

Taylor finished 6-6 at the free throw line, which continued his streak of consecutive made shots from the charity stripe.

He has now hit 30-straight free throws, which is the longest active current streak in the NCAA.

Along with the two Troy guards, Steven Cunningham also chipped in 10 points and five rebounds.

Troy now leads the all-time series with Denver, 5-2, with all the wins taking place in Sartain Hall.

“This is like every other win,” Weathers said. “It’s a huge win. 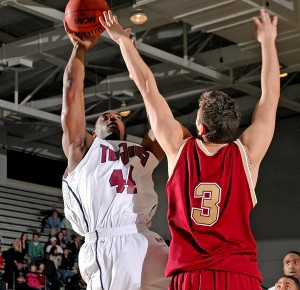 “It just keeps our confidence going. We work so hard and we have lost some heart breaking games, it’s tough. But when we win, it feels like all that hard work wasn’t for nothing. We aren’t going to celebrate, we are just going to continue to go hard – everyday.”