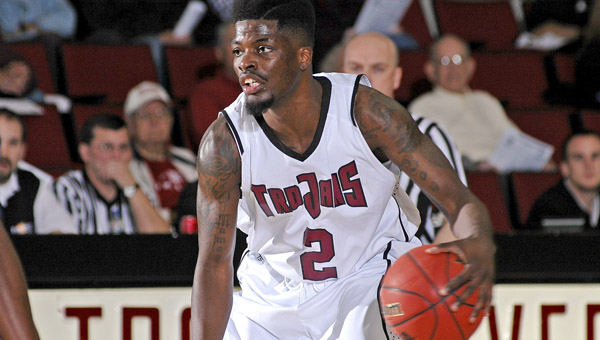 The old saying ‘time heals all wounds’ is one the Troy Trojans men’s basketball team is hoping is true.

It has been exactly a week since the team has played a game, falling in a devastating fashion, a one-point home loss to FIU.

And while the Trojans have not necessarily been road warriors this season, wining just one game away from Sartain Hall, the team will hope its fortunes will change today in Mobile against the South Alabama Jaguars.

Something that head coach Don Maestri said he believes will help the team is how they approached this past week.

Since the loss to the Golden Panthers, the team has had three days off, Friday, Saturday and Monday, in the hopes that it would return to the court with fresh legs and refocus mentally on the different objections it needs to accomplish to help bring wins home.

Even despite Troy’s 5-17 overall mark, the Trojans, as they have all season long, remain upbeat each and every single day, according to the coach.

“It’s probably the biggest asset this team has – it’s their attitude,” Maestri said.

“(The coaches and I) have been here, heck, since the Dead Sea got sick, and over those number of years, you are going to have some teams that struggle. But this group, despite all their struggles, doesn’t look at their record. They come to practice everyday as if they were undefeated. It’s an amazing attribute to have.”

That attribute will be one used to help the right the wrong from the last time the two teams met on the court.

While the Trojans may have lost by a mere five points, the shooting performance back on the Jan. 27 game showed a different story.

The Jaguars finished shooting 45.3 percent and 41.7 percent from the field and 3-point line, respectively.

Also not helping the Trojans, was the breakout performance by South Alabama’s Gary Redus, who had a career night, scoring 32 points, hitting 7-of-8 3-pointers.

“Well, when we reviewed the game, we were not very good on offense,” Maestri said.

“We are going to have to play a better game offensively and really shoot a high percentage in this game coming up Thursday. I didn’t realize how poorly we played last time, because the game was close. We had an opportunity to win the game at the end when it was a two-point game and we had the ball two times in a row and didn’t score. I thought we played them a good game but after reviewing the film, we didn’t play very well on the offensive end.”

Since that loss, Troy has gone 1-1, winning its only road game of the season at Louisiana-Monroe.

Even though it would be easy for the head coach to say this season has been tough on not only him but also his players due to the losses, he said every season is tough in its own way.

“I think, to be honest, they are all tough,” the coach said. “If you are undefeated, you don’t sleep at night because you are worrying about how you are going to win the next game. If you lost a few games, you don’t sleep because you are worrying about how to win the next game. During the season, you just live and die with each game and after the game is over, if it didn’t come out right, you’re sick. But you get over it the next day and get ready for the next one.”

As for the next one, this will be the 15th time the Trojans have Jaguars have met on the court, with the team from Mobile leading the overall series, 10-5 and 8-5 since Troy joined the Sun Belt.

South Alabama will enter the game with a 10-12 overall record, coming off a loss to Middle Tennessee last Saturday night.

As for what a big key to the game will be for the Trojans to make sure the Jaguars hit a two-game losing streak, Maestri said it will all start with the team’s play offensively.

“If you look at the way we played on offense, not only the shooting was poor, but the handling of the ball, the passing, the execution in general was poor. All that needs to be stepped up a notch in order for us to win down there.”

The two have combined for 87 made 3-pointers this season and always give the Trojans an extra boost offensively, when needed.

Lee will be in the starting lineup for a third consecutive game.

Since both Lee and Huddleston can hit big shots for the team at any random time, Maestri said it is purely a matter of knowing when the time is right to take one out or leave one in.

“We do it strictly by feel,” he said, “because when either gets hot, they seem to run off two or three in-a-row.

“When they hit one, you don’t want to move them because you just don’t know if they are about to get hot. There is no real explanation for it. We have gotten a feel for both of them as the year goes on, and obviously if one gets hot, we are not taking them out.”

The Trojans will look to exact some revenge tonight, at South Alabama, with a tip-off set for 7:05 p.m.