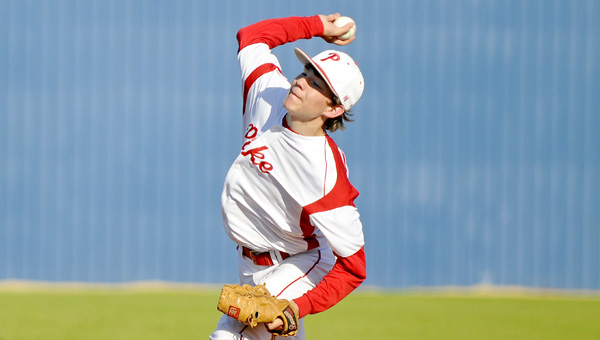 Neither pitching nor hitting came as a problem to the Pike Liberal Arts baseball team during the 2010 season.

The Patriots excelled in both all the way to the state championship game.

In the 2011 season, some of the new faces, as well as old, will look to pick up right where the team left off, hoping to set the tone for both the team and the season on the mound.

While the Patriots lost four pitchers who combined for 18 wins in 2010, coming back is Sam Carroll, Lawson Stewart and Josh Starling. Together, the three combined for 10-2 record, adding 78 strikeouts and an ERA of 3.66.

It’s those three that will be leading the charge in the new season, according to head coach Butch Austin.

“As far pitching goes, Sam, Lawson and Josh are going to be our big guys, they are our main men,” the coach said.

“But I could say the same about Blake (Floyd) and (Andrew) Quincey too. We have five pitchers that I am not scared to throw. Both Sam and Lawson have thrown in pressure situations before. Our pitching is not ready just yet, but it will be ready.”

Carroll is fixing to be the No. 1 starter for a team, and with good reason thanks to last season’s statistics. The then junior finished second on the team in wins with six, and gave up the fewest hits allowed by a starter with 19.

Carroll finished with 34 strikeouts and 15 walks in 25 innings pitched.

Starling saw some action towards the end of the season, particularly, in the playoffs, striking out 21, walking seven and earning a 1-0 record and a save, in 16 innings.

“Each of the guys bring something different, which is good,” Austin said. “Sam is power, Lawson is more outside inside, he knows where his pitches are going and Josh is probably between those two. He has a good little fastball, a good cure. He puts it where he wants it.

“I think all three are going to have good seasons for us,” the coach added.

Even though Carroll’s role with the team is going to be much different this season, being the No. 1 pitcher is something he is excited about.

“I am ready for it,” he said. “I like having that kind of pressure on me.”

While the senior had a dominating fastball last season, this year, he will have a new weapon in his arsenal – a curveball.

“I have been working on it for a while. I like where it’s at right now – it’s nasty.”

Unlike his teammates, Quincey will be getting back on the diamond for the first time in a regular season since his sophomore season, which was at Ariton. And unlike his teammates, the senior will bring a different kind of pitch to opposing batters, one that when thrown correctly, is difficult for even the most skilled batter to hit.

The senior throws a knuckleball and has been working on getting it ready just in time for the season.

“I started throwing it when I was in the ninth grade,” he said. “It has gotten better over the years, but it is pretty much my go-to pitch now, mixed in with my curveball.”

Behind the top five will be an arrangement of underclassmen for the Patriots on the mound. Some of the players who will be called upon in the later innings will be: Tatum Barnes, Robert Benton, Michael Carroll, Tyler Rotton and Blake Floyd.

“We have a lot of juniors that have played,” Austin said, “most of them are going to have to play this year.

“We haven’t really had a chance to put a lot of these guys under pressure. There hasn’t been a chance for us to scrimmage for us to find out what these kids are made of but we are going to find out soon enough.

Of the group, Floyd has the most experience, throwing 10.2 innings last season, earning a 2-0 record, striking out 10 while giving up six earned runs on eight hits.

“I think this year (the pitchers) are going to have to do a good job of setting the tone for the team,” Starling said. “Last season, we had a great offense, but this season that may not be the case. So it is going to be important for the pitchers to do their jobs. I know I am ready for the season to start and I am ready for the opportunity to pitch (a lot of innings).”

Trojans hold off Tigers in finale