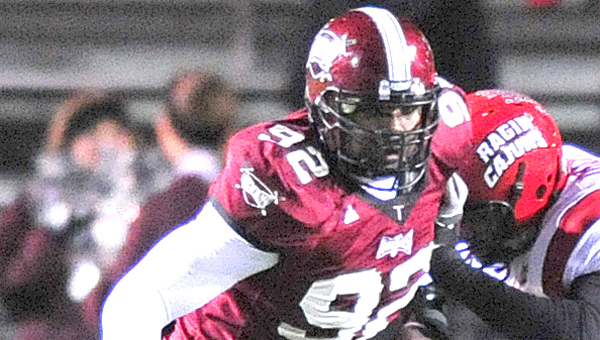 Former Troy Trojan defensive lineman, Steve McLendon, rushes the quarterback during his senior year back in 2008. Now, McLendon, who is playing for the Pittsburgh Steelers, is hoping to win a Super Bowl, this Sunday, in Dallas.

When people look up and down the Pittsburgh Steelers roster, they may see several familiar names.

But with a constant stream of sports news being fed to the public every second of the day, what else would you expect.

Names like: Troy Polamalu, James Harrison and Ben Roethlisberger are the first that come to mind.

But while those names may stand out to some, the team itself knows it takes everyone to win a championship.

Including the names that people may not know, yet.

This is where former Troy Trojan and current Steelers defensive lineman, Steve McLendon, comes in.

While he may be easy to pick out in a crowd thanks to his 6-foot-4, 280-pound body, he is a player seldom referred to or referenced about.

And that is OK with him, because in the end, McLendon knows it is more about helping his team win a championship than himself.

On Sunday, that is exactly what he, and the rest of his teammates, will be looking to accomplish, in Super Bowl XLV.

“I figured that one day that I would be able to come and see (a Super Bowl),” he said from Dallas after the Steelers’ Wednesday practice.

“But it’s always been a dream to play in one. I think everyone dreams of playing in the Super Bowl. I’m not going to use the word ‘never’ because anything with God is possible, but to be here, now, is really an unbelievable experience.”

It is how McLendon got to this point in his career that is may be more impressive than any statistic thanks to both his endurance and patience.

After not getting selected in the 2009 NFL Draft, the defensive lineman signed with Pittsburgh, then coming off its NFL record sixth Super Bowl victory, the following day as an undrafted free agent.

When it came time for the team to select its final roster in the following season, McLendon did not make the cut, however, he was signed to the Steelers’ practice team.

From there, he was cut and resigned by the team four different times in the last two seasons.

This season for the Steelers, McLendon has played in seven games, recording two tackles and recovering a fumble against the Tennessee Titans, back in the second week of the season.

Even through all the tough times of uncertainty, McLendon still finds himself preparing for the biggest game of his life.

“(My teammates) have told me to prepare like you have never prepared before – work harder then you ever have before,” he said.

“Because this is a chance of a life time and I live by a motto: ‘I have one life to live, one place to play at a time and I have one shot and one chance.’ So I am going to stay right with that, and let whatever happens, happen. Hopefully, it’s for the good.”

But before McLendon was competing for a championship, he was winning them while at Troy.

And like his current days in Pittsburgh, he had to fight for his right to play.

Before becoming a full-time starter in his senior year back in the 2008 season, McLendon was a reserve for most of his first three seasons.

That however did not stop the player’s willingness to work hard and do whatever it took to help the team, according to his old head coach.

“He battled through a lot to have a good college career, but when he left here, that’s what he had. But he was an interior lineman, and not one that just plugged up holes – he made a lot of big plays for us.

“He made things happen. He saw that he needed to work hard to get where he wanted to be and even though he has had to fight for his chance to play in Pittsburgh he is doing that and proving himself to that organization and everyone else that he is good enough to be there.”

While the past week or so has been dedicated to getting as well prepared as possible for the Green Bay Packers, there have been some opportunities for the Steelers to make memories.

Something McLendon has taken full advantage of.

“It’s crazy, it’s great,” he said about the atmosphere surrounding the big game. “It’s basically what we were expecting it to be.

“Steeler Nation was here waiting for us when we got off the plane Monday. And Media Day was maybe one of the coolest things I have ever been to. The first couple of days were amazing, and super exciting, but now, it’s all about business. We all know what is at stake – it’s about the Lombardy (trophy).”

Even in the final game of the season, McLendon will be fighting for his right to play.

He will be notified the day of the game whether he will be one of the 43 players who are active to play in the game, or not.

But after everything he has gone through so far, McLendon is prepared for anything.

“I will be preparing like I am dressing, and do whatever it takes to play,” he said.

“Everything else is going to come. Only thing we are going to do is execute our game plan to the best of our ability and I feel like we will because practice has been going really good for us.”