FIU sneaks out of Troy with one-point win 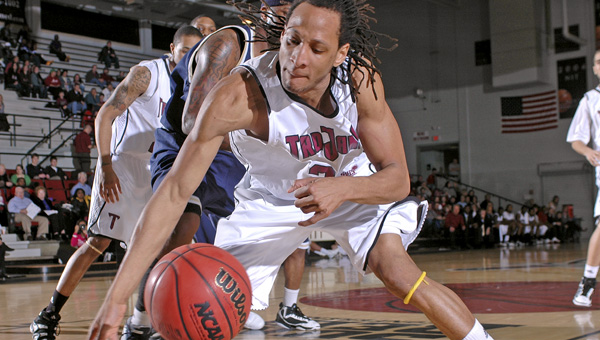 Troy University's Bernard Toombs (21) attempts to save the ball from going out of bounds during an NCAA basketball game in Troy, Ala., Thursday, Feb. 3, 2011. (Messenger Staff Photo/Thomas Graning)

It was a 3-pointer that kept Troy in the game, and a 3-point shot attempt that nearly helped the Trojans win it.

But in the end, the result was the same as it has been for most of the season, a loss.

With 54 seconds left in regulation, Travis Lee hit a 3-point attempt against the FIU Golden Panthers that knotted up the score at 72-72.

After a scrum for the ball on the other end that saw the ejection of FIU forward Eric Frederick and missed shots by both teams, the game headed into overtime.

There Troy would battle back from a four-point deficit, and take a 80-79 lead after Regis Huddleston was fouled beyond the arc, hitting two of his three free throws, with 31.5 seconds left.

But that final lead would not hold, as a costly traveling call under the basket, after a FIU missed shot, gave the Golden Panthers another try and there they would take the game, with a 81-80 win.

“It was just a battle all the way through, for 45 minutes.”

“That’s how the game was going, it was physical,” Vernon Taylor said after wards

“There were plenty of times where I cut through and got elbowed. But you got to keep playing through things like that.”

It was Taylor who was called for traveling, after grabbing the rebound from an FIU miss and fell to the ground with 11 seconds left.

“I thought it was foul,” Taylor said about hitting the floor with the ball. “I thought I was going to the line for two, but they didn’t call it that way.”

Troy started the game off well, sprinting to a 9-0 lead, but that lead would soon evaporate, thanks to a 13-0 Golden Panthers run.

The Trojans would not lose their confidence however, as the home team battled back to regain the lead, 23-21.

The Panthers would regain the lead thanks to a sideline play as time expired in the first half, going into the break up one, 35-34.

FIU would take control, going on by as high as seven minutes, before Troy would settle down and find its rhythm.

Lee’s 3-pointer capped a 7-2 Trojan run at the end of intermission to force the extra period.

“There was a chance right there at the end of the second half where I thought we had a chance to lose the game, but VT put us back in it,” Maestri said. “And we make a great defensive play when the game was tied and get the ball for the last shot in regulation, an opportunity to win it. And then in the over time, depending on how those last nine seconds go, if they call the guys on his back, instead of traveling, we go to the free throw line. Instead, they call traveling and they make a great play to win the game. It’s just one of those games where a lot of big plays were made on both sides, and they made the last one.”

Taylor led all scorers with 23 points, as three other Trojans finished in double-digits.

This was Troy’s second-straight loss at home, and the second road victory of the season for FIU.

“Our 3-point shooters didn’t have the game that they needed to have at home,” Maestri said.

“Regis and Travis were 7-21 from the 3. And those are the guys you are really depending on for the 3-point shots. (When they miss) that makes you have to really battle hard, and you can’t really get any kind of momentum because you are missing shots and they keep getting opportunities. The game stayed up and down, rather than being consistently played by us. But it’s not their fault, we just need them to have good shooting nights at home.”