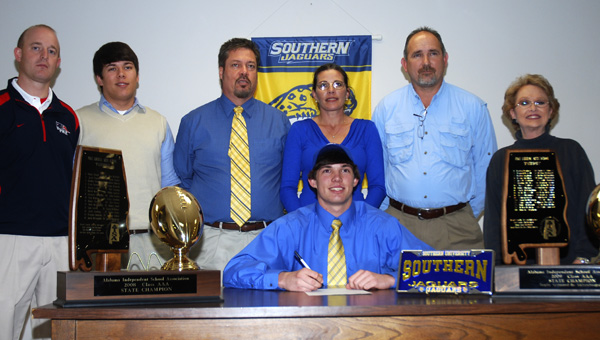 It had been a number of years since a football player from Pike Liberal Arts was busy signing a letter of intent and posing for pictures with friends and family on national signing day.

However, that was exactly what Patriot wide receiver Ashton Davis was found doing Wednesday afternoon in the school’s main lobby.

The paper being signed was from Southern University, a Division-1 school in Baton Rouge, La., with Davis being the program’s latest commitment.

“Out of all the colleges I visited, I fit more down there then anywhere else,” Davis said.

“They want me to play four years and start as a freshman.”

The last Patriot to sign to a Division-1 school on the first Wednesday in February was Sam Sellers, five years ago.

During Davis’ two-year stint with the Patriots, he started in 27-straight games at a number of different positions, including wide receiver, tide end, defensive end and outside linebacker.

It’s the first two positions mentioned where Davis will be lining up next season for the Jaguars as part of a “Hybrid receiver” position where he will line up as both at the same time.

But there will not be a transitional phase needed for the former Patriot, as he played the position at PLAS.

“It’s the same kind of thing that I have done here, so it shouldn’t be a problem,” he said.

“I think that I need to gain a little bit more weight and work on my speed a little bit. (The coaches) believe I can do that over the summer, so hopefully I will be ready to play at the beginning of next season.”

During his senior season, Davis played a big role on both sides of the ball for the Patriots, as he finished with 15 catches for 450 receiving yards and three touchdowns.

He also finished with 57 tackles and averaged 2.5 sacks per game.

Because of his achievements on the field, the standout received close to 30 offers from schools around the south east, including: Jacksonville State, South Alabama, West Alabama, South Carolina State and Alabama State.

But when it was all said and done, the 6-foot-5, 205-pounder said that Southern University was the place for him.

“(Recruiting) had been a little rough, especially the past month or so,” he said, “but I am happy that it’s over with, and I am happy to be going to Southern.”

While Davis may be happy to get his collegiate future started, his former coach, Steve Kilcrease, said while it is going to be difficult to not have him playing for the Patriots any longer, he is proud to see one of his players take the next step.

“A lot of what he did probably went unnoticed to a lot of people because we weren’t a spread team, throwing it all over the field,” Kilcrease said. “That’s where he would have really excelled, but he is a very unselfish person.

“He was a guy that one of our better blockers, and could really do it anywhere. He is a playmaker, he is very fast and that is something a lot of people probably don’t know about him. I am proud of him and he is very deserving of this accomplishment.”