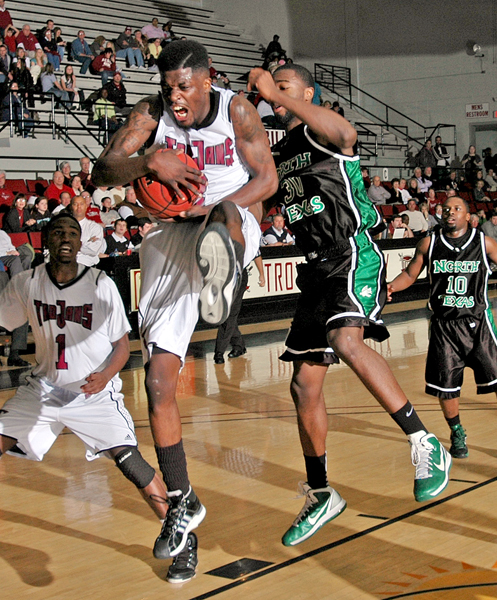 The first 11 road games of the season for the Troy Trojans were difficult ones as each resulted in a loss.

It was in the 12th game against Louisiana-Monroe, that the Trojans finally broke through and secured a victory away from Sartain Hall.

While the win snapped an 11-game losing streak on the road, Troy head coach Don Maestri said it is nothing to get excited about.

“It’s not a goal or anything (to win on the road), it’s just good to win for us,” the coach said. “It wouldn’t have made any difference if it was at home.

“We are at a point where any win for us is a happy feeling. There is not a lot of significance to where we were playing – we were just happy to win another game.”

The win improved the Trojans to 5-16 overall and 3-6 in conference play.

Now, Troy is hoping the winning ways will follow them from Monroe back to Pike County, as the team gears up for another home game, this time against the FIU Golden Panthers, who like the Warhawks have a losing record.

In 10 meetings between the two teams, the series is tied at 5-5.

When playing at Sartain Hall, however, the Trojans have a 3-2 advantage, including winning last year’s meeting in Troy, 81-78. After starting conference play perfect at 3-0, the Golden Panthers have dropped six-straight Sun Belt games, and like the Trojans, have won just one road game this season, against ULM.

Those records do not take anything way from FIU in Maestri’s eyes, as he expects a team ready to win come Thursday night.

“FIU has lost a lot of close games lately, but they are extremely talented and very athletic,” he said.

“They know how to score and to play and (head coach Isaiah Thomas) has given them an up-tempo style and they enjoy playing that way.”

Under the former Detroit Pistons Hall-of-Fame point guard, the Golden Panthers have struggled at times during the last two years.

Thomas is currently just 15-38, thanks to a 7-25 overall record in his first season with the team, good enough for a sixth place finish.

Offensively this season, FIU is scoring 73.1 points per game, but giving up 76.1 to its opponents.

“(Isaiah) is very cordial, kind of low key guy,” Maestri said. “He has that great Isaiah Thomas smile that he brings with him. He is just a likeable person. He is a Hall-of-Famer, but you would never know it because he doesn’t really ever talk about his accomplishments. He loves basketball and he loves to coach, he has had basketball in his blood since he was a little kid.”

As far as what Thomas and his Panthers can expect to see from the Trojans in the meeting, Maestri is sticking to this ‘slot machine’ philosophy and going with Travis Lee in the starting lineup instead of Regis Huddleston, due to Lee’s big performance Saturday night against the Warhawks.

Lee finished with 15 points in his first start since Dec. 11, 2008. Like the senior, Shawntez Patterson will see more minutes thanks to this 15-point, nine rebound performance this past Saturday night.

“Travis responded, and gave us momentum at key times especially in the second half and (Patterson) played a real good game for us,” the coach said. “He came in and really helped us.”

Season of change ends the same