Patriots gear up for new season 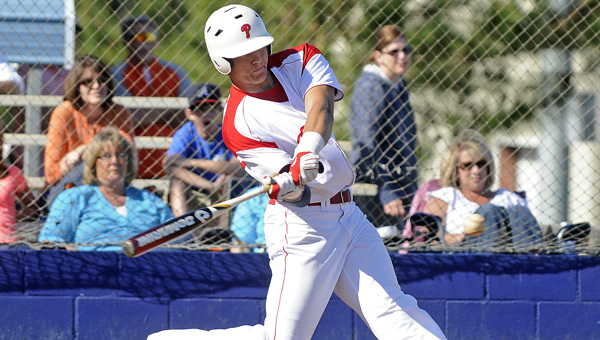 Nick McLaughlin takes a swing at pitch last season during a Patriots’ game.

It was a little less than nine months ago when the Pike Liberal Arts Patriots were last seen on the baseball diamond.

However, it is a memory most of the players and coaches would like to forget.

In a season where it appeared inevitable that the program would win its first ever championship, another baseball powerhouse, Glenwood Academy, proved to be the only thing standing in the Patriots way.

The Gators would sweep through the championship series to claim another title, leaving some of the Patriots in tears.

On an overcast Monday afternoon, head coach Butch Austin overlooks his players on the edge of the PLAS campus, running up and down a hill behind Wal-Mart.

A new season is on the verge of beginning, and Austin ready to see what the 2011 Patriots are made of.

“We lost five good seniors last year,” Austin said. “But I think we are going to have a good defensive team backed up with some good pitching.

“I think we are going to hit the ball – I don’t know where I am going to play everyone yet. It’s too early, we haven’t gotten all of that figured out quite it, but we will get it done before too long.”

Each also had an on base percentage over .600.

But the greatest contribution each brought on a daily basis, is one of the main things Austin is looking for in this season’s team.

“Their leadership is going to be hard to replace,” the coach said.

“But I believe we will find it in our seniors this year.”

The Team has just three seniors on it this year, led by Sam Carroll, Evan Strother and Andrew Qunicey.

Even though he was just a junior last year, it was Carroll you led the team in two major offensive categories: homeruns, 11, and RBIs, 55.

On the mound, the right-hander finished second on the team in wins with six, adding 34 strikeouts and an ERA of 3.92 in 25 innings. Now, though the situation is different, he is hoping to lead his teammates to the place where last season ended.

“Make it to a state championship,” Carroll said about his expectations for the season. “That’s it.”

“We have hustle right now, we aren’t there yet. We’ll be there soon though. We have a bunch of really good athletes on this team.”

Carroll is just four months removed from two broken bones in his left arm, after getting hit in a football game against Glenwood.

After a few months of rehabilitation, the senior is ready to go.

“The shoulder is fine,” he said, “it’s not even bothering me anymore.”

“I feel a lot better – I have been waiting to get back out here for a long time.”

Before the players can take the field, they have to have the right mindset.

And there is no better way to do that, than to run, according to the coach.

“We have been doing a lot of running, getting in shape and that does a lot to get the guys ready to go mentally,” he said.

The Patriots will open the new season against the last team to beat them, as Glenwood will be in town for the rematch, which will be played on Feb. 14, at Riddle Pace Field.