Trojans hope to bounce back 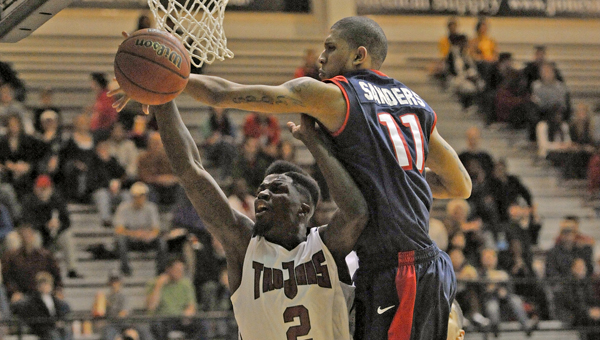 After another crushing defeat at the hands of a conference rival, the Troy Trojans men’s basketball team will look to regroup in search of victory on a familiar place – the road.

For the fifth time in eight games this month, the Trojans will be the visiting team, this time making a trip back to Louisiana, and more specifically to Monroe for a game tonight.

And the team will be doing so coming off a difficult loss.

It was just Thursday night, when Troy nearly overcame a 14-point deficit to the hands of South Alabama, before falling short, 83-77.

The Trojans were able to cut the lead down to a single point, however, was unable to maintain its rally, helping the Jaguars to hold on.

“Personally, it might be a little bit tough because we work so hard at practice,” guard Will Weathers said, “and to continue to get loses so close, not blow out loses, it’s tough.

“We just get motivated, because we can see that we can do much better than how we are playing. We see that we play well in the second half. We try to have our first half feel like our second half. We just got to keep working. We can’t get discouraged, we have to keep going out there, put our hard hat on and go to work everyday.”

It’s that mentality of playing hard, no matter what happened in the past that has head coach Don Maestri believing his team still has a shot at winning, no matter the opponent.

“I think that’s one of the things this team has done a great job of (this season),” Maestri said.

“The frustration is after games, but when tomorrow comes, its like Annie, the sun comes up. They come back to work, they get over (the loss) after wards and realize they have another opportunity. That is probably one of the things I am most proud of, the fact that they do recover. Obviously, the water doesn’t taste as good after a loss, but they have learned the record doesn’t mean a thing. They come to practice ready to go.”

Going into its game against the Warhawks, the Trojans will be hoping to achieve something it has not been able to do all season long – win on the road.

And even though the Trojans have been going through a difficult stretch, the same can be said about Louisiana-Monroe.

This season, the Warhawks are 6-16 overall, and are 1-7 in conference play.

When the two team’s met last season, Troy won both games, including a thrilling one-point victory at Monroe.

All-time against Louisiana-Monroe, the Trojans are 4-2, winning the last four meetings.

But the past is not something that anyone on Troy is counting on going into today’s game.

“This season in the league, everyone is in the same boat in terms of if a team plays well on any given night, they are tough to beat,” Maestri said.

“If we play well, we have a legit chance to win the game (tonight). This has been a year where the whole league has struggled. Everyone has been up and down, except Florida Atlantic they have done well in conference. The key for us is to not allow (Thursday night’s) loss to have an emotional effect on us in the first three to four minutes of the game. We can’t have a hang over. If we can get off to a good start and start and continue to play well, I like our chances.”

The Trojans and the WarHawks will tip-off at 7 p.m. tonight.