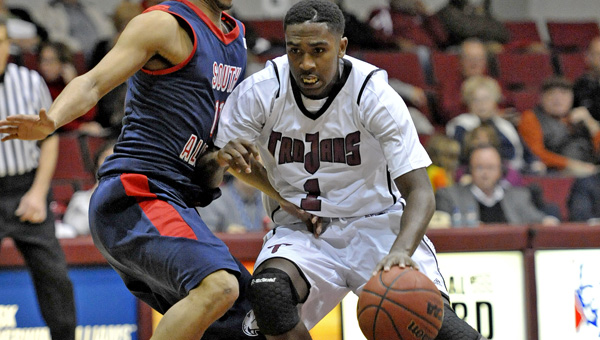 It was a classic story of too little, too late.

Despite facing a 14-point deficit with close to 11 minutes left in the game, the Troy Trojans battled back against Sun Belt foes South Alabama Thursday night at Sartain Hall.

After mounting a furious comeback that put the Trojans within one point of tying the Jaguars, it was all for not as a key turnover and missed 3-pointer allowed the rivals from Mobile to return home with an 83-78 victory.

“I think it was a hard fought game,” head coach Don Maestri said following the loss.

“It was kind of a cyclical game. We start off well in the first eight or nine minutes in the first half and then we don’t score a point for a nine-minute stretch and let them take a big lead. The fact that we didn’t get knocked out by halftime was a big positive thing because we were in trouble there. But it did not break us, so that was a good sign.”

In the first half, it looked as if the Trojans would ride another home hot-streak to a win.

After getting down 8-0 in the first two minutes, Troy went on a 22-5 run to take a 22-13 lead with 12 minutes left in the first half, with Regis Huddleston chipping in 11 of those points.

The Jaguars would respond however with a run of their own.

In the final 12 minutes, the visiting team would outscore Troy 28-10 thanks to unexpected outside shooting threat.

Against the Trojans, the forward had a career night, connecting on 5-of-6 3-point attempts in the first half, and in the process helping his team a 41-33 lead with his 19 points.

“(Redus) is kind of like Regis and (Travis Lee),” Maestri said, “those guys, once they get that feel, it’s hard to stop them.

In the second half, Redus and the Jaguars continued to shot the ball well, building up the lead to 14 points with 11:29 minutes remaining in the game.

That was when the Trojans began their comeback, going on an 18-7 run in a little over five minute span. A Huddleston 3-pointer cut the lead to 67-64 with close to six minutes left.

Both team fought back-and-fourth for the following minutes, and after a Bernard Toombs three-point play, Troy was within one point, at 75-74. After a Jaguar turnover, the Trojans received the ball with 35 seconds left in the game, facing a two-point deficit.

With 23.6 second left, Huddleston was looking to make a pass inside to Toombs, however, the ball never reached its destination and instead went out of bounds, giving South Alabama the ball back.

After a Jaguar free throw to make it 81-78, the Trojans brought the ball down and put it in the hands of their top 3-point shooter, Huddleston. In double-coverage, Huddleston forced up a 3-point shot, but it fell short, and with it, Troy’s chances of a victory.

“I could have got something better,” Huddleston said. “I kind of panicked and was looking to draw a foul. There was a lot of time left on the clock still.”

Huddleston, and Will Weathers both led the way for Troy, finishing with 17 points. Vernon Taylor and Bernard Toombs all contributed double-digits in points with 16 and 14, respectively.

Both Weathers and Toombs finished with double-doubles, and the guard had 11 assists and the center has 12 rebounds.

Redus finished with a game-high 32 points, hitting 7-of-8 3-point attempts in 37 minutes.

Allyn Cooks and Augustine Rubit also had double-digits with 19 and 12.

“To me, personally, it’s hard to lose at home,” Maestri said.

“These guys have friends and teachers that come to the game. With that personnel interaction, you feel like you let (the fans) down when you don’t come out on top. You want to look good and make these people leave happy.”

Two areas where the Jaguars were able to excel in where from the free throw line and the 3-point line. South Alabama hit 74.4 percent of their free throws (25-35) while making 10 of their 24 shots from beyond the arc (41.7 percent).

Troy struggled from both spots on the court, making 14-of-25 free throws and hitting just eight of its 34 3-point shots.

“In the second half, we started playing pretty good basketball,” the Troy head coach said. “When it was about a 10-point lead, I think it hit us that there was still plenty of time left in the game where we could get the lead down then we put enough pressure to put the pressure on them. Our guy’s mindset was that they had enough time. But at the end of the game it was just poor execution. But I give them credit, they won the game. The Redus kid had a career game. When a kid is having a hot night like that, that really helps them.”