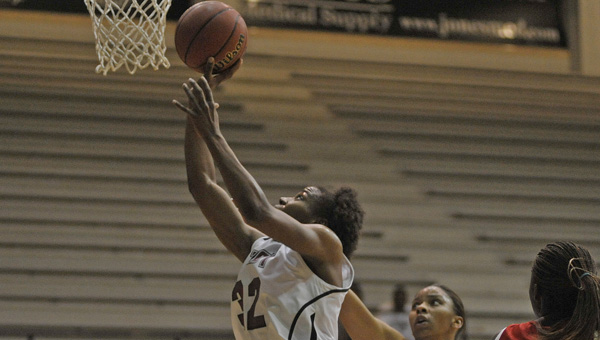 When it was all said and done, it was an historic night for the Troy Trojans women’s basketball team.

Against Sun Belt rival South Alabama, the Trojans waved goodbye to their five-game losing streak thanks to a 66-41 win, but a big part of that win came from the team’s lone senior – Donette McNair.

All season long, the 5-foot-11 forward from New London, Conn. had been chasing history, and against the Jaguars, she finally caught up to it.

With the win all but wrapped up, McNair hit a turn around jumper with just under three minutes to go to give her 22 points in the game, and 1,001 points for her career as a Trojan.

In doing so, the McNair became just the 17th Troy basketball player to accomplish the feat, and the 10th since 1993.

The last player to do it was Kylie Morrissey in 1999.

“I knew, but I was trying not to think about it,” the senior said her last two points of the game.

“I didn’t really know until (Tuesday night) when my mom told me I was close. I was trying my best just not to think about it. It’s more important to worry about the game, I wasn’t worried about myself, and I was worried about winning the game because last year when they came here, they won at the buzzer. My big thing was to beat South Alabama.”

And that is exactly what the Trojans did.

After giving up 195 points in the two games leading up to Wednesday night’s show down, Troy held its opponent to its third lowest final score of the season.

In the first half alone, South Alabama scored just 11 points, which was the lowest total scored against Troy this season, beating out Birmingham Southern who scored 13.

During those first 20 minutes, the Jaguars went without hitting a field goal for eight minutes, while the Trojans would go on a 10-0 run, to build a double-digit lead that it would not relinquish.

“Obviously, we are very pleased with the win,” head coach Mike Murphy said. “This is an in-state rivalry against a South Alabama program that has had our number in year’s past.

In the final 20 minutes, not much changed, as Troy continued to hit shots while their opponent struggled.

For much of the second half, the Trojans were ahead of the Jaguars by 30 or more points.

The home team shot nearly 52 percent for the whole game, and 33.3 percent from beyond the 3-point line.

The low percentage gave the Trojans an opportunity to collect rebounds, which is exactly what it did, as it out rebounded its rival from the south, 42-27.

“I thought the key for us was defensive rebounding,” Muprhy, “they did not get a lot of second opportunity shots (Wednesday night).

“We only gave up nine offensive rebounds in the game, and I told the kids at halftime, that was going to be critical to our success. (South Alabama) shoots so many 3-pointers, and with long shots come long rebounds.”

The win improved the Trojans’ record 5-16 overall and 2-6 in conference play.

So far this season, four of those wins have taken place at home, with the last against Florida Atlantic back on Jan. 2.

“Every win is a great win, but we don’t worry about what happened in the past,” the coach said. “The only thing we had power over was South Alabama.

“That’s the way we approach things, and because of that philosophy, I think we have been able to overcome some difficulties and challenges after losing five-straight to beat a team like South Alabama.”

The Trojans will again be hitting the road however, as the team has a weekend date with Louisiana-Monroe on Saturday afternoon.

Troy has won just once on the road this season, defeating Mississippi Valley at the Georgia State Invitational back in December.