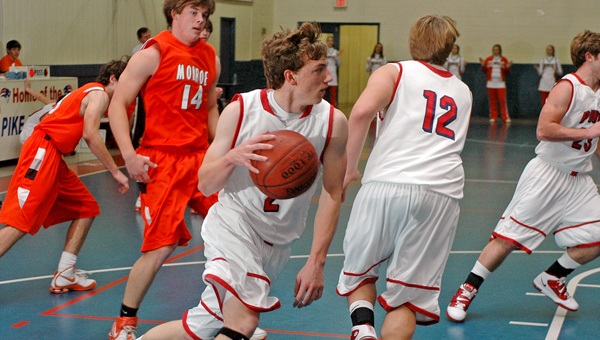 The success endured by Pike Liberal Arts on the gridiron is one that is well documented.

But there is another team from the school on the verge of accomplishing an equally impressive feat.

Even though the AISA basketball playoffs for varsity teams will not begin until the beginning of February, one Patriot team is looking to win its second championship in three years on the hardwood this weekend in Auburn.

The school’s junior high team won its first AISA Invitational state tournament back in 2009, and now, thanks to an overall 11-2 record, the team is primed for another title run.

“We have had a good year,” head coach Bob Pickett said. “They are excited about going back to the tournament and looking to win.”

Fueling the fire for the team is last year’s trip to the tournament, where the team was ousted by then No. 1 seed Prattville Christian in the first round.

“This bunch has been talking about it all summer long,” Pickett said.

Starting things off in the Patriot’s road to redemption is Glenwood, who PLAS has already beaten once this year.

But it will still be a tall task to take down the Gators again, particularly because of one of their post players.

“But we have a play to stop him. He can make a big difference for their team, but I think we will find a way to win. The last time we played Glenwood though was before Christmas, so it’s almost like we haven’t played them. It’s going to come down to the wire, and we are going to have to play hard to win.”

Leading the charge for the Patriots however is a talented ninth-grader of their own, in Chandler Avant.

“Our leader on the floor is Chandler Avant,” Pickett said. “He has been a starter for the past three seasons, we go as he goes. But not to underestimate anyone else, we have a lot of good players here. Austin Ingram has had an unbelievable season and has really stepped up into that second leader role and Bryan Adams has had four great games in the post for us.”

While the eight-team tournament will represent challenges all along the way, should the Patriots advance, Pickett said the fact that many from the team had competed in it before would be beneficial for success.

“This is a very competitive tournament,” he said. “But I like this bunch because of how close there are. We have been trying to talk about being mentally tough, preparing yourself, not getting down on yourself, during tough games.

I like how hard they have worked so far and how much they put into everything they do – they truly have put everything in to this junior high season.”

PLAS will tip-off against Glenwood on at 11:30 a.m. today at Lee-Scott.

Unlike the boy’s team however, the girl’s team will have an easier road, as they are the No. 2 seed, which granted them a bye in this weekend’s tournament.

Going in, the Patriots are 10-2 and head coach Tim Davenport said his has seen his team work hard for every basket this season.

“This season has been pretty good,” Tim Davenport said.

“Our two losses were close games, and that maybe should have won. But we have had a good season up to this point.”

It was just two seasons ago, that PLAS was just 1-15 before making the tournament last season and losing in the first round.

Now, the girls find themselves in a much different situation.

“They have endured a lot these past couple of seasons,” Davenport said.

“I could see that we would be pretty good (two seasons ago) though. The girls were playing hard but taking it on the chin in close games. Playing against ninth-graders as seventh-graders is not an easy situation.”

With the bye in the first round, PLAS will take on the winner of the Lee-Scott, Wilcox game at 2:50 p.m. this afternoon.

But when with that extra rest, Davenport said it is not going to be an easy road to the championship. “We have seen Lee-Scott, who is the two time defending state champs.”

“We beat them earlier but the tournament is in their gym, so they will be very competitive.

“We have beaten Fort Dale, but they are going to be a good team as well in this tournament. To get into the tournament, you have to be pretty good, so we are expecting some tough competition.”

Lee’s skill on the Austrian slopes earns a gold…