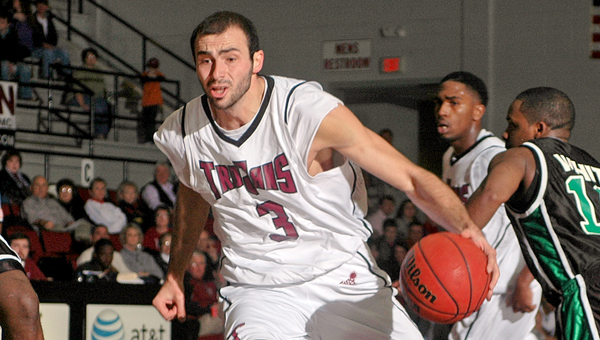 The visiting team came in with one of the best records in the conference, sporting a 14-3 overall record, while the Trojans had nearly the exact opposite record.

However, after 40 minutes of play, it was the Men of Troy that proved to be the better team, as the Trojans came away with a 89-81 win, clinching consecutive wins for the first time this season.

The game was the first time the two squads had met on the hardwood since the conference championship, when North Texas won the conference last March.

“Everything that you needed to do to win a big game like this, these guys did (Saturday night),” Troy head coach Don Maestri said after the win.

“It was not about how we were going to finish, but how were going to start tonight and how we finish in the second half. Without question, this game was the most total game I think that we have played all year, in every aspect. The guys were so intent and determined to pull this thing off, that they were ready.”

Unlike the Trojans game against Western Kentucky Thursday night, Troy shot the ball well from all over the court in the first half.

In the first half alone, there were 13 lead changes, as both team shot around 50 percent from both outside and inside the 3-pointline.

Both Regis Huddleston and Travis Lee came up big for Troy early on, as the two combined to go 6-for-6 from beyond the arc in the first half.

After the first 20 minutes, both the score was tied at 48-48, as Troy finished the final three minutes on a 10-4 run, thanks to Vernon Taylor, who scored six of those points.

“I remember what happened back in March. I was so focused on this game. I wanted to win it so bad.”

The basket was still huge for Troy at the beginning of the second half, as the home team started the last 20 minutes of the game on a 13-4 run to take a 61-52 lead.

That nine-point lead would extend to as many as 15 points, as the Trojans continued to hit big shot after big shot.

But while the offense was working, the defensive play was just as dominant.

In the second half, North Texas was just 1-11 from the 3-pointline and shot 38 percent from the rest of the floor.

“Defensive intensity was the difference,” Will Weather said. “We just came out there and wanted to punch them in the mouth. 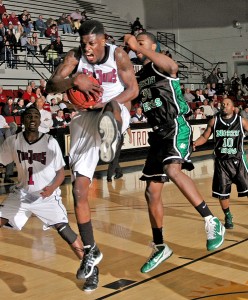 The Mean Green would cut the lead to six points with close to eight minutes left, but that would be as close as it would get, as the Trojans would maintain the lead thanks to key free throws.

“It’s a big win, another big win at home, but we got to keep it up – we can’t be satisfied,” Weather said. “I think that this little success is going to push us to work harder at practice, keep our defense intensity up. We didn’t have any mind lapse this time tonight.”

“(Thursday’s win’ was one that boosted everyone’s confidence,” Cunningham said. “It was something we really needed.

“I just feel like, kind of, we are unbeatable when we play the best of our ability.”

Along with the final score, the Trojans also outrebounded the Mean Green, 34-33.

“Everything we had to do, was done,” Maestri said.

“Staring off with the defensive end, picking charging fouls which set the tone that we were ready to work as hard as we could work to win the game, to Regis and Travis Lee hitting threes to VT driving to the goal and creating problems, to Steven Cunningham driving and creating problems, to Mo controlling the game, which he did a great job of (Saturday night). We did it all.

“If I were a spectator (Saturday night), I would have thoroughly enjoyed this basketball game,” the coach added.

Trojans hope to get back on track at home