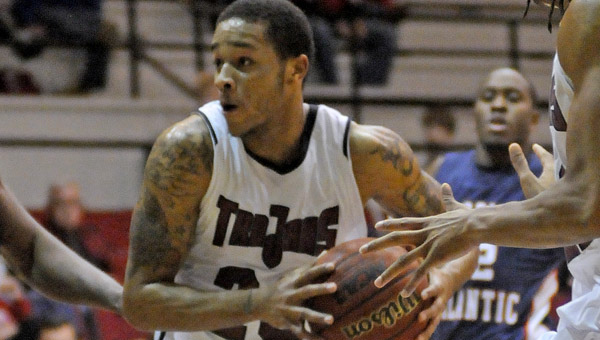 A sluggish first half was not enough to stop the Troy Trojans men’s basketball team from getting its first Sun Belt win of the season Thursday night against Western Kentucky at Sartain Hall.

Now, the team will be looking to make it two wins in a row for the first time all season today against conference rival North Texas, at home.

In doing so, head coach Don Maestri hopes that some of the nerves the team may have been playing with during the first 20 or so minutes against Western Kentucky are no longer a factor against one of the conference’s best.

“We were the home team, but we haven’t been (in Troy) in so long, that it felt like the pressure was on us, that we weren’t at home,” Maestri said.

“There was heat on our guys, I thought they looked nervous and uptight. They only guy that had any intensity and focus was (Vernon Taylor) to start the game off with. I am hoping that (Thursday night) helped us get a little more comfortable playing at home,” the coach added. “Because when we play North Texas we can’t afford to start off the way we did against Western Kentucky, we have to start off the way we finished on Thursday night.”

While Troy only trailed the Hilltoppers by six points at the half Thursday, the team shot just 25 percent from the field in the first 20 minutes, and hit just two of its 11 3-point attempts.

It was a second half offensive surge led by senior guards Vernon Taylor and Travis Lee that helped propel the Trojans to it’s second home victory of the season.

Taylor finished with team high 20 points, while Lee broke a recent 1-16 slump from beyond the arc by hitting four big 3-pointers to help build a sizable Troy lead on the way to the double-digit win.

“We know we have the potential to be one of the top teams in this league, we just got to find ourselves like we did (Thursday),” Taylor said.

“If we keep plugging along we are going to be all right – we are going to have a chance to play for the conference championship. It feels great to smile after a game like this, but we can’t be too happy. We got another tough team coming in here with North Texas.”

This will be the first time the two teams have faced one another since the conference tournament championship, when it was the Mean Green who came way with the title and a trip to the NCAA Tournament.

A season ago, Troy finished 1-2 against North Texas, with each of the games being decided by three points or less.

Troy will be going into the game with the same starting lineup of Taylor, Will Weathers, Regis Huddleston, Steven Cunningham and Bernard Toombs it had against Western Kentucky in the hopes that the change will have the same winning effect.

“We believe in the slot machine philosophy,” Maestri said with a laugh. “You put a quarter in and it pays, keep using that same one.

“We haven’t been able to develop a consistent feel or chemistry that comes with winning, so hopefully (Thursday’s win) will help us. I will say this, North Texas, which is the best team in the league by far, has four starters back from last season’s team that beat us.

Troy will tip-off against North Texas at 7 p.m.