Patriots hold off Volunteers in overtime 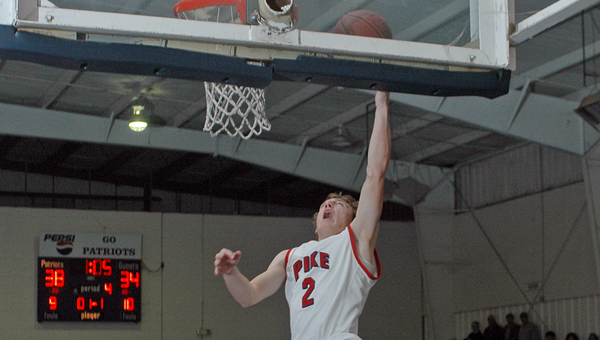 The Pike Liberal Arts boy’s basketball team found themselves in position to get the inside track on the path to the area championship Friday night against Monroe Academy.

And when it was all said and done, the Patriots ended up in a very good position.

While 32 minutes was not enough to secure a victory, 36 minutes was, as PLAS found a way to overcome poor shooting, defeating the Volunteers 40-36 in overtime.

The victory improved the Patriots to 2-1 in the area, with only a handful of games remaining on the schedule.

“We are young, we are streaky and (Friday night) we didn’t play a great game offensively,” head coach William Johnson said.

“But we battled back, and I’m proud of that. Offensively, we struggled shooting the basketball all night. We hit two 3-pointers all night and shot close to 20. But we tried to get some high percentage shots. (Monroe) had all five guys guarding the lane pretty well, and they were letting us shoot the 3-pointers. So, when we are in that situation, we have to be a better basketball shooting team and hit those shots.”

In a game that saw just six lead changes, the final one turned out to be the most important, even though it came at an odd time of the game.

After the closing seconds of regulation had occurred, Monroe guard Tanner Smith was whistled for a technical foul on Tanner Free.

Since the foul came after the buzzer, Free was allowed to shoot two free throws before the overtime began.

After missing the first, he hit the second, giving his team a 35-34 lead before the overtime had begun.

PLAS got the ball to start off the final period and would hold on to the win thanks to some other key free throws.

“I have never seen that in my seven years of coaching,” Johnson said after the bizarre overtime ruling.

“I’ll take that win any day though and I told the kids that afterwards. We are 2-1 in the area, and we have a chance to really set ourselves up for the Area Championship, and that’s our goal. I couldn’t be more pleased with our area record right now.”

Leading the way for the Patriots was ninth grader Chandler Avant, who finished with a team high 15 points.

Like the boy’s team, the girl’s were also victorious against the Volunteers, only their game was not nearly as close as the one that proceeded it.

The Patriots cruised to a 52-12 victory over Monroe Academy to get their first area win of the season.

“That’s the best game our girls have played all season,” Johnson said. “We had two really great days of practice and Madison Sanders is working hard and our shots are finally starting to fall. That was a good win for our girls. There aren’t many games left for us, and they needed that. Everyone contributed, they played well defensively and they played a whole game.”

Both teams will be in action again in area play on Tuesday on the road against Fort Dale.