Trojans throw down Hilltoppers at home 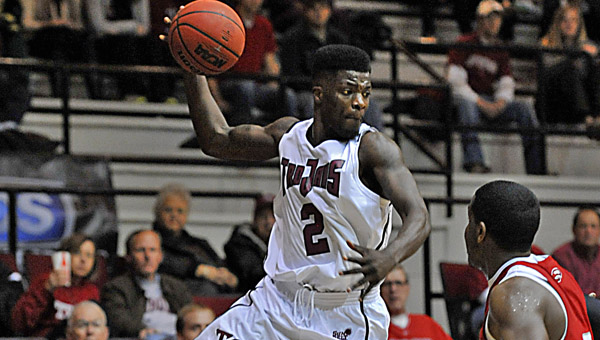 Vernon Taylor aims to throw a ball off a Hilltopper player in the first half. The 82-68 victory was the Trojans’ first Sun Belt win of the season. (Photo/ Kevin Glackmeyer)

The home crowd at Sartain Hall got to see two different versions of the their team Thursday night.

For much of the first half against Sun Belt foe Western Kentucky, the Troy Trojans played like the team with a 2-13 record, plagued by bad shots and key turnovers.

However, in the second half, it was a completely different team – one that resembled the conference championship team of a season ago.

Fortunately for the Trojan faithful, it was that second half team that helped pull out a home victory, and in the process get its first conference win of the season, after it downed the Hilltoppers 82-68.

“It’s great to see them have the opportunity to be very happy after a game,” Troy head coach Don Maestri said following the win.

The team has also gone through its fair share of losing, as the win snapped a four game skid.

After the first 20 minutes, it appeared Troy would be heading to a fifth-straight loss, as the team shot just 25 percent from the floor, and 18.2 percent from the 3-point line, making just two of its 11 attempts.

Western Kentucky on the other hand, was shooting nearly 43 percent and 30 percent from the two respective spots on the floor, and at one point, held a 13-point lead.

The final 20 minutes were a completely different story all together.

After chipping away at a six-point halftime deficit, the Trojans took a 38-37 lead with 15:34 left to play in the game.

While the score remained close in the following minutes, Troy would break away on a 20-2 run, from 11:38 to the seven-minute marker, giving the home team a 68-49 lead.

The spark for the offensive outburst came from senior guard Travis Lee, who hit four 3-pointers during the run, despite being hampered with a knee injury that has bothered him all season long.

“Me being a shooter, I just got to keeping shooting, I got to keep my confidence up,” said Lee, who finished with 12 points.

Troy would cruise the rest of the way to victory, and help bring its record to 3-13 overall, and 1-3 in conference play.

It just feels so good,” senior guard Vernon Taylor said. “It feels like a lot of pressure is off our shoulders to have this first win against Western Kentucky.”

Taylor led all Troy scorers with 20 points in 29 minutes.

In the second half, the Trojans shot close to 60 percent from the field and and 41.7 percent from beyond the arc.

But in the end, it all goes back to what happened in the second half.

“I think the biggest turning point in the second half came when (Taylor) hit a midrange jumper to give us the lead, and then (Lee) started hitting shots,” Steven Cunningham said. “And when (Lee) started making it rain, it’s night-night.”

Before Thursday’s game, the coaches decided it was time to switch up the lineup.

Because of that, Cunningham got his first start of his college career.

Along with the junior forward from Dothan, Regis Huddleston started along side Taylor, Will Weathers and Bernard Toombs.

And that is the look fans can expect for Troy’s next home game Saturday night against league leaders North Texas, according to Maestri.

“We had a statement Wednesday, ‘change of lineup, change of luck’,” the coach said.

“I really think they did a good job of getting momentum and keeping it in the second half,” the coach added.