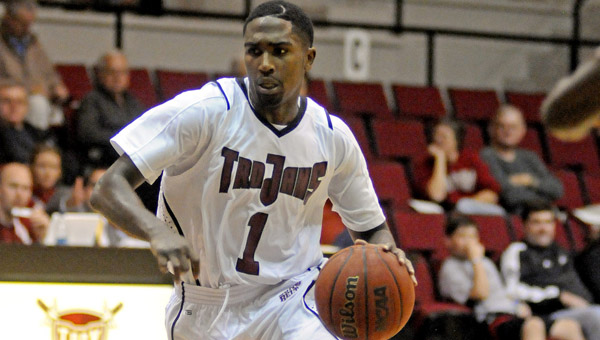 In the 26 days that have passed since the Troy Trojans men’s basketball team last played a game at Sartain Hall much has taken place.

Along with a new year being ushered in, Auburn won it’s first National Championship since 1957, a severe blizzard shut down Atlanta and many other cities along the east coast for multiple days and Verizon confirmed they are getting the iPhone.

But all that is in the past, as the present will see the Trojans back in front of the home crowd for just the fifth time this season tonight as the team plays host to Western Kentucky.

Troy is coming into the game losers of four-straight on the road, including dropping its last two by a combined five points.

The timing for the home game couldn’t be better, according to the players and coaches.

“We have been on the road for so long, and didn’t have that many home games, so we are hoping for that burst of energy that the crowd can give for us to win this game and pull one out. It is a relief to play at home. Playing on the road is tough, but it is nothing like playing at home.”

Even though Taylor, who is the Trojans’ leading scorer at nearly 15 points per game, said he is still not 100 percent healthy after an ankle injury sustained against Western Michigan on Dec. 21, he is well enough to play good basketball.

“When I want to do certain things it affects me a little bit,” he said. “But we are going to get through it.

“It’s real big to get these two wins (at home). This is home court advantage and our fans. We all really need this – it’s going to be very important for us to get these.”

This will be the first time the Hilltoppers have been to Troy in almost a year, when the Trojans came away with an eight-point victory back on Jan. 21, 2010.

All-time, Western Kentucky has a 7-4 edge on Troy, however, the Trojans were able to take two of three from the Hilltoppers during the 2009-10 season.

While both programs have been the teams to beat in the conference in recent seasons, both find themselves in the exact opposite position, as currently both are winless in Sun Belt play.

That is still not an excuse to look past former conference champions, according to assistant head coach David Felix.

“The challenge (to beat Western Kentucky) has been there ever since we joined this league,” he said,

“They are the premiere team in this league basketball wise and even though their record is not as good as it’s been, they are by far one of the most talented teams in the league. It’s going to be a real big challenge for us, especially to see how we respond after two close losses on the road.”

In the hopes of responding to the challenge, and sending Western Kentucky to its fifth-straight loss, the Troy players believe it will have to be the defense that steps up, as opposed to the offense.

“I feel that, at certain points of the game, we get mind lapses on defensive end,” guard Will Weathers said. “We will be up by three and (the opposing team) will hit two wide open three-pointers to get the lead.

“More of us have to lock down and stay focused on the defensive end. I think our defense can really open things up for our offense. If we play hard, diving on the floor, taking charges and getting rebounds we can get some breaks, get a couple three’s and develop our own energy especially with all these road games. If we develop our own energy continue to play deep the whole 40 minutes instead of a half, I think we will start getting those tough wins.”

One statistic that the Trojan hope to continue today is its field goal parentage at home.

In four games, Troy has shot 42 percent, while just 38 percent on the road.

And even though the Men of Troy have a 1-3 record at Sartain Hall this season, head coach Don Maestri does not believe records, good or bad, can affect how a team plays.

“When you are in first place, or undefeated, you don’t look at your record then either,” he said. “If our record were reversed it wouldn’t make a different.

“You always prepare for the next game and that’s how we do it and that’s how everyone else does it. Even though it’s frustrating to not get any rewards along the way I think you get out here and you prepare the same way for the next game and try to focus on that and see if you can focus on things that will get you better, make some improvements. Hopefully, we will begin to catch some breaks soon. But I know one thing for sure – it’s going to be nice to be finally playing at our place again.”

The Trojans and the Hilltoppers will tip-off at 7 p.m. tonight at Sartain Hall.