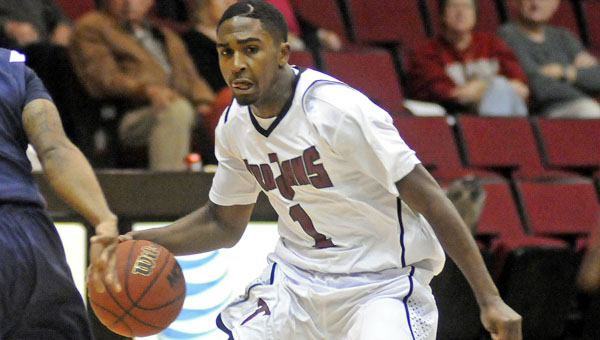 At the age of 15, his travels began after he and his family moved out of New Orleans to avoid the destructive path of Hurricane Katrina in 2005, relocating in Lewisville, Texas.

There he stayed until he moved to the Orlando to attend the University of Central Florida, where he received a basketball scholarship out of high school.

However, things would not work out as Weathers had planned with the Knight.

This led to his most recent move, and one that has begun to work well in Troy, Ala.

After a year of sitting on the bench to help satisfy the NCAA’s transfer policy, Weathers is finally on the court, and more importantly, becoming an impact player for a Trojan team that is in desperate need of one.

The 2010-11 season has been one that has not gone the way the Troy men’s basketball team had hoped for, as it has suffered through a good deal of injuries which has led to as many losses, 13, as it had all of last season.

But while good news may be hard to come by currently, it was Weathers who helped bring some to the program this week.

Thanks to his efforts last week, the guard was named the Sun Belt conference’s Men’s Basketball Player of the Week.

Against Louisiana-Lafayette and Arkansas-Little Rock, Weathers put a combined 59 points on the board, including a career-high 32 against the Ragin’ Cajuns, as well as recorded his third double-double of the season against UALR on Saturday thanks to his 27 points and 10 assists.

“But that doesn’t mean anything because we aren’t getting wins, so I just put it in the back of my head and still just keep working and trying to get better to help the team out.”

Even though Weathers was the Trojans’ main scoring threat this past week, it is a role that he is not all familiar with.

The 6-foot, 165-pound sophomore is more accustomed to getting the other four guys around him the ball, as he is currently leading the conference in assists with 85.

But it was the time off the team had around the holidays that allowed him to work on developing his game and discovering how to become a better shooter.

“I always had it in me,” he said about scoring a multitude of points.

“But over the break, I got a chance to relax a little bit. I think for the first half of the season, I was rushing a little bit too much and so I just went back to the basics (over the break). I did a little working out, worked on my shots and moves and looked at some film seeing where I can pick my spots better. I think now, I am more relaxed and calm and that is going to help me score a little bit more and help my teammates score as well.”

In the 12 games before the two week break at the end of December, Weathers was shooting close to 31 percent from the floor and 29 percent from beyond the arc.

In the new year, the guard has hit 59 percent of this shots from inside the 3-point line and is also 50 percent from outside of it.

It is this more calm and confident approach that has Weathers’ coaches excited about what they are seeing on the court.

“I think it took him half the season to kind of figure out the speed of the game, and just get his feet wet on the floor again. He went home and came back and was shooting a little bit better, obviously, and is becoming the point guard we were hoping to see. Getting Mo scoring more helps us right now because it’s pretty obvious that we need to develop another shooter.”

“I think he is working more on his shooting and that is something that has helped him out on his scoring,” head coach Don Maestri said.

“He still has a lot to improve on, but one thing that he does well is play hard.

“In a lot of games, he is our second leading rebounder, which says a lot, and he is one of the only guys in the league that will dive for any ball on the floor. His intensity is something that will really make him work harder as the season goes on.”

As for Weathers, he knows that a few good games in a row cannot get to his head.

“I can still improve on everything,” he said.