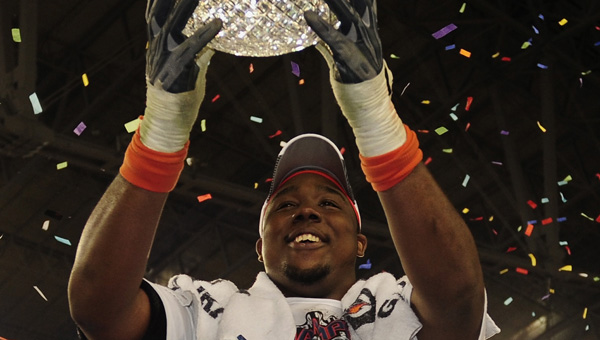 For the second-straight year, a team from Alabama is playing for the right to win a college football National Championship.

And for the second-straight year, Troy natives have made the cross-country trip to be a part of one of the most anticipated games of the year.

In the case of two Troy residents, the trip to Glendale, Ariz., is one that they will not soon forget, regardless of the outcome.

Donald and Cassandra Kelly have made the trip to the National Championship game to not only cheer Auburn to a title, but also to cheer on their son, Zac Etheridge, who is playing in college football’s biggest stage.

“It’s been an amazing experience so far, for all of us,” Donald said Monday afternoon.

“There are five of us out here that came to watch Zac play in this game, but I know there are plenty more watching and cheering back in Troy, Alabama. To be here is such a blessing for all of us, and we are making the most of it.”

Since they arrived in Arizona on Saturday, Donald said he and his wife had visited with their son twice.

“Zac is ready to play in this game,” he said. “I think he has been for a while now, too.

“Zac has gone through a lot in the last year, but he has worked hard and God has blessed him with this opportunity, and it’s one that we are all so very thankful for.”

It was over a year ago when the Kelly’s watched as Etheridge lay motionless at midfield of Jordan-Hare Stadium after a collusion with Ole Miss running back Rodney Scott.

For the next couple of months, Etheridge was found in a neck brace thanks to two broken vertebrae in his spine.

Now, the two proud parents get to watch their son complete his final game as an Auburn senior.

While not everyone may have a son playing in the game, the opportunity to see their beloved Tigers win a championship was a good enough reason to make the trip.

Even if it meant battling the forces of nature and long lines at the airport.

But that is exactly what Bo and Natalie Lankford did Sunday night and Monday morning, in an effort to get to University of Phoenix Stadium.

“It’s been a crazy adventure,” Natalie said. “But if it means we get to watch a once in a lifetime thing with Auburn winning the championship, it’s worth it.”

Natalie, who is a Troy native and still lives in the city, graduated from Auburn, while her husband grew up in the college town.

In an effort to avoid any bad weather, the Lankford’s left Troy Sunday night for Ft. Walton to catch their flight, however, many others headed to the game had the same intentions.

Despite long waits due to delayed flights at the airports, the two got to Glendale Monday afternoon, ready for the big game.

“This is something we never thought we would be a part of, so it is great to be out here,” she said.

Unlike the Lankfords, Auburn student, Haley Walters, did not have to spend money for her tickets, as she got to go Arizona thanks to a little luck.

A student ticket lottery helped land the Pike Liberal Arts alumnus the opportunity to watch her school play for its first championship since 1957.

“When I won, I was kind of in shock,” she said. “This is something that does not happen very often, so to see Auburn play in the National Championship game is something I am very grateful for.

Walters, who was in attendance for every Tiger home game this season and the Ole Miss away game, says if Auburn wins, she expects the party to still be going on, on campus when she gets back Wednesday.

“I still expect them to still be rolling Toomer’s Corner if Auburn wins,” she said with a laugh.

“It’s going to be crazy for a long time if Auburn can get a win.”