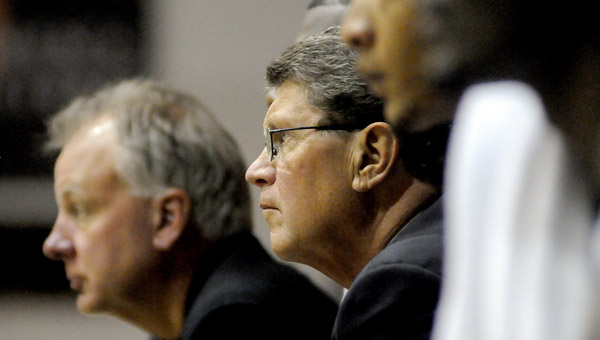 In one day’s time, the Troy Trojans men’s basketball team witnessed the end of a four decade long streak, while witnessing the continuation of another streak which began more recently.

For the first time in his 41-year coaching career, Trojan head coach Don Maestri was not on the sideline drawing up plays and arguing calls during a game, due to a severe nose bleed which began on Friday morning before the team made the trip from Louisiana to Arkansas.

“Basically, I just had a severe nose bleed,” Maestri said over the phone Sunday afternoon after returning to Troy from Louisiana.

“We just could not get it to stop bleeding. I ended up having to go to a nose doctor to have it looked at it and they had to cauterize the blood vessels. I let the team go ahead, and got to listen to the game over the computer.”

While Maestri was forced to miss Saturday’s game, the coach said all is well now.

“I spoke to the guys before the game over speaker phone,” he said.

“Told them to go out there and play hard, and I thought they played extremely hard – they gave a tremendous effort even in a loss. And that is something they have to keep doing, because if they do, hopefully things will start to fall for us.”

Unfortunately, things were not falling for the Trojans Saturday night against Arkansas-Little Rock until was too late.

After trailing by double-digits for most of the game, Troy was able to mount a comeback to cut the lead to within striking distance, however, it was not enough as the Trojans fell 76-73.

The loss dropped the Men of Troy to 2-13 on the season, lengthening its current losing streak to four games.

On the recent losing streak, Troy has lost by four points or less three times.

“It’s not like they haven’t been in the games,” Maestri said.

“But I don’t think that makes any difference in the end. Losing is always frustrating, whether it be by a basket or by eight or nine points. The key point through all of this is to remain focused and to continue to try to improve.”

Now, the Trojans will have some time to do just that, as the team’s next game is not until Thursday and it will be in Sartain Hall for the first time in the new year.

Coming into town is the Western Kentucky Hilltoppers, who is also looking for its first in win in conference play, as the team is currently 0-2, and 5-9 overall.

“I think the main thing is for us to focus on our next opponent, and not our losses,” Maestri said.

“We can’t do anything about the past and we have a good Western Kentucky team coming in, so we have got to get ourselves ready.”

This will be just the fifth game of the season in Troy, as the Trojans have just a 1-3 record in front of the home crowd, with the only win coming in the season opener against Huntingdon College.

“It’s going to be good for everyone to be at home for a while,” Maestri said. “We have been on the road so much this season we could probably get a degree in hotel management.”