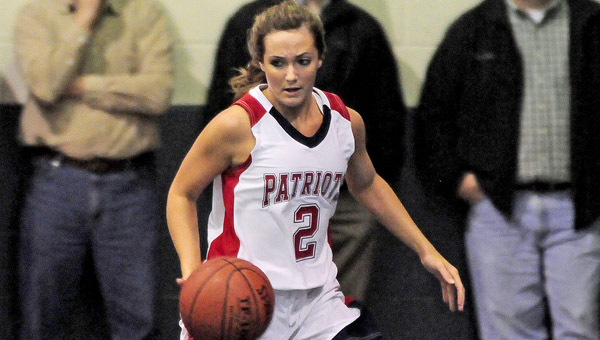 To be a head coach of any sporting team takes a lot of time, effort, sacrifice and dedication.

Some can handle the workload, while some can deal with more.

The first year Patriot coach finds himself in a position some would find unique, as he is not only the head coach for the boy’s varsity team, but also the girl’s varsity team.

But to him, it is what’s normal.

Before taking over as head coach for both teams in the spring of 2010, Johnson was the head coach of both the boy’s and girl’s teams at Fort Dale for a number of years.

“Obviously, each team is different,” he said. “There are some things that one teams does better than the other.

“It can be hectic at times, but it’s a lot of fun and rewarding.”

The hardest part about Johnson’s job is not juggling two different teams, but making sure that both teams continue to find success.

During the 2009-10 season, both teams advanced to the AISA state tournament, with the girl’s team finishing with the program’s first ever title trophy.

On top of that, Johnson is dealing with two drastically different teams from last season, as both are underclassmen heavy.

“Both teams are extremely young,” he said.

“A lot of the players had little to no varsity experience coming into this season, especially on the girl’s side.”

There are seven freshmen on the girl’s team, followed by two sophomores and one senior in Madison Sanders.

“This is going to be a team to watch in the future,” the coach said.

“Right now, we are taking our bumps. It hasn’t been easy for us but this going to be a good club.”

As for the boys, like the girls, the team has one senior in Andrew Quincey, three juniors with the rest being sophomores, freshmen and an eighth grader.

That eighth grader is Chandler Avant, who is a starter on the team, something that Johnson said he has never done.

“There are a lot of things that I have had to change from what I was used to. But in a lot of ways having the young groups that we have is going to be beneficial in the long run. The young players are going to know how to run the systems, which will make both teams good.”

While the future may look bright for both squads, Johnson said that does not give either of the current teams room to slack off.

“I still expect both teams to play to a set standard,” he said. “They still have to give it their best every time they are on the court.

“We may not achieve the goals we had at the start of the season, but we are still going to give it our all.”

As it is for all teams, making the playoffs is a standard goal.

Despite the Patriots’ youth and experience, the postseason could be a very real possibility for both teams, especially since the players have been under the new system for a while.

Both records are keeping the teams in the area championship conversation, and that is something that Johnson hopes to continue throughout the remainder of the season.

“We still have some great opportunities in front of us,” the coach said.

“Both teams are in a position where they each control their own destinies. If you look at it, every year, there are teams that get into the playoffs that everyone counts out. If we cant get to that position, anything is possible. That’s what we are shooting for.”

Fountain travels to Arizona for players