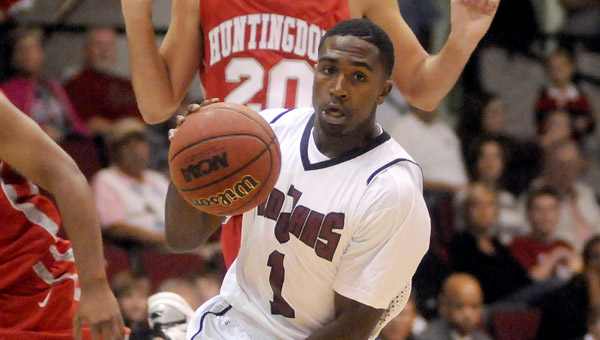 Troy University's Will Weathers (1) drives the ball during a basketball game between Troy University and Huntingdon College in Troy, Ala., on Friday, Nov. 12, 2010. (Messenger Staff Photo/Thomas Graning)

It has been two weeks since the Troy men’s basketball team was last in action.

While much has changed during that time, one thing has not – the Trojans’ winning spirit.

Even though the team may currently be 2-11 all is not lost, as the games that truly can make or break a season are set to begin, as the Trojans dive into the bulk of its Sun Belt Conference play today.

And thanks to the recent break away from the court, head coach Don Maestri believes his team will be ready for the second part of its season.

“The past two weeks has helped us get healthy again,” Maestri said, “not only physically, but mentally.”

“We had a lot of guys that were banged up with injuries so this time off has given them a chance to heal, and as a team, we were struggling in some of the games we had before the break. So this time helped us try and move past those losses mentally.”

Up first for Troy is Louisiana-Lafayette in Louisiana.

Like the Trojans, the Ragin’ Cajuns are 2-11 overall and winless in the conference so far, as it stands at 0-2, while Troy is 0-1.

“ULL has been struggling also this season,” the coach said.

“I think they know how tough it is to try to build off losses, but if they have an advantage in the contest, I’d say it’s because they are playing at home. You always feel more comfortable at home than you do in someone else’s place. But we can take care of that by playing well, and doing what we do well.”

This will be the first time the two teams have met since last season, when ULL defeated the Trojans 69-54.

Inside the Cajundome, at Lafayette, Troy is 3-2, with the most recent victory coming back in 2009.

After the game in Louisiana, the Trojans will head north to face Arkansas-Little Rock, in Little Rock.

“If we can get a split on the road this time around, I think that would be tremendous for our club,” Maestri said.

“You can only build off of wins, and some wins right now are exactly what this team needs.”

One aspect that will be beneficial for the Trojans in their efforts to find success is just who will be the court.

There have been three substantial injuries that have plagued the team this season, however, that no longer appears to be the case, as the new year will see three big time contributors return to the line up.

Senior guard Travis Lee has been bothered by a knee injury for practically the entire season, and according to Maestri, while the knee is still bothersome, Lee is going to play.

Along with Lee are two other upperclassmen, Flynn Clayman and Vernon Taylor.

The Colorado State transfer Clayman has yet to see action on the court this season thanks to hip surgery, however, now the forward has been practicing on the court and expected to see minutes and different positions.

Taylor, who is the team’s leading scorer, missed the last two games due to an ankle injury, but barging any unforeseen problems with the injury will start against the Ragin’ Cajuns tonight.

The Trojans will look to even up their conference record tonight against ULL, with a tipoff scheduled for 6:30 p.m.