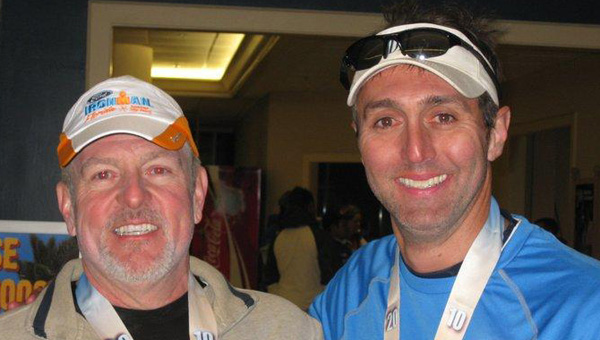 Above, from right to left, Dr. Michael Woods and Allen Argenti pose for a picture after completing the 2010 Ironman Triathlon in Panama City this past November. The triathlon consists of nearly 140 miles split between swimming, biking and running. Submitted Photo

There are few athletic events in the world that are as revered and feared as the Ironman triathlon.

It demands the absolute most from its competitors, as each swim, bike, and run through 140 plus miles of terrain.

While many try to complete the challenge, very few find themselves crossing the finish line.

Troy residents Dr. Michael Woods and Allen Argenti were among those few this past November, as both competed in the triathlon in Panama City.

There are only six Ironmans in North American, with another in Hawaii.

Out of the 3,000 participants that took part in the Florida race, a number close to 2,400 were how many completed the feat.

While the race finished just a little over a month ago, the training for both men began nearly two years ago.

In the 18 months leading up to the Florida event, Woods and Argenti were found either biking the country roads of Pike County, swimming laps in the recreation department pool or running the streets of Troy in the early hours of each day.

“This was something that both of us wanted to do,” Woods said.

“We both had this goal to accomplish,” Argenti added. “We knew we needed to train hard for it.”

And that is exactly what the two men did.

In order to prepare themselves for a course that made its contestants swim 2.4 miles, bike 112 miles and run the final 26.2 miles, both men trained for the triathlon extensively for months prior, but it was not until the final six months where they really pushed themselves to get ready.

On their bikes, Woods and Argenti would ride three days out of the week, averaging around 25 miles, however on the weekends, the two would stay out for 90 to 100 miles in a day.

As far as running routines, the two would typically run 30 miles four days out of the week.

In the pool, each man would spend about an hour to an hour and half, swimming close to three miles a day.

“We really didn’t have a lot of free time,” Argenti said. “We were either at work or training for the Ironman.”

Much like their time during training, the two men did not have much time to waste during the race itself.

Each participant must cross the finish line in 17 hours after the triathlon has begun.

15 hours and six minutes after running into the Gulf of Mexico to begin the first part of the race at 6 a.m., the two men crossed the finish line on foot shortly after 10 p.m.

“It really is a feeling of ‘I survived this!’,” Woods said.

“You realize as you are doing it that you can’t really ever stop, especially during the swimming part, and that is something that keeps you going.”

“We are both fitness freaks,” Argenti said. “This is one of the most extreme things you can do in the world, and I think that is what really gave us the motivation to compete in it and complete it.”

Another form of motivation came at the end of the event, and not just the finish line itself.

“We had a lot of people from Troy waiting for us at the end,” Woods said. “To have such great support like we had helps so much.”

Besides completing the triathlon, both men had something else when it was all said and done – friendship.

Before training together, both Woods and Argenti were not too familiar with one another, and were paired up by a mutual friend because of their desire to compete in the event.

Now, that is not the case.

“We are very close,” Woods and Argenti said.

“We spent hours and hours together training for this and then we completed it together – it was a great experience.”

The only question left for the Troy residents is, will they do it again.

“We have already started talking about it,” Argenti said. “At first, there was no way that I was going to do it, but the morning after we finished, I woke up thinking that I would want to do it again.”

“It was incredibly difficult,” Woods said, “but at the same time, I would love to do it again.”

Both Woods and Argenti said they are shooting for their second Ironman triathlon in 2012.