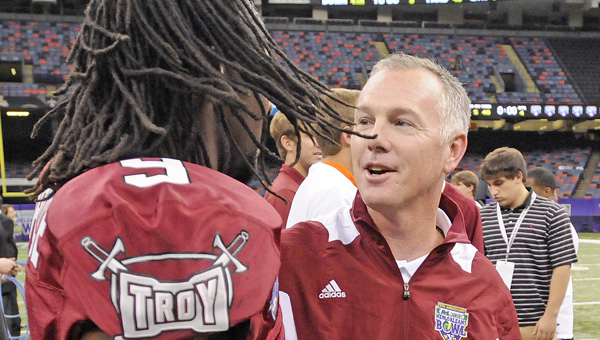 With the 2010 season all but in the rear view mirror for the Troy Trojans, now begins a different kind of a season – one of reloading.

And while recruiting has been going on for the better part of the last couple of months, besides obtaining new players, Troy is hoping to keep familiar faces around.

One of those faces that will be around next season is offensive coordinator Kenny Edenfield.

A week after Troy’s regular season finale win over Florida Atlantic, there were reports out of the Louisiana-Lafayette football camp that said new head coach Mark Hudspeth, who coached with Edenfield while the two were at North Alabama University, was interested in hiring the Troy coach as his passing game coordinator.

However, Edenfield chose to stay with his alma matar, in a decision that came late Tuesday afternoon.

All throughout the decision making process, the coach talked about how his family would play a large role in the final decision – and that is exactly what happened.

“This was a decision I had made earlier (Tuesday afternoon) after talking to my family about it and when it all came down to it, it was a family decision and one that I am very happy with.

“This is a huge weight off of my shoulders for sure,” he said. “But this was something that I really had to look at and think about.

“I think in the end, it had to be Troy. This is where I played, this is where my wife is from, my son goes to school at the university. This is the place I really wanted to be at. What made it really difficult was the fact that I had a good buddy getting a major job and he wanted me to come down there. That’s not easy to turn down.”

While Edenfield did not discuss any specifics about either of the deals offered by the two programs, he said both were fair.

“This is where I want to be right now at my career,” he said.

“Who knows what will happen in the future, I may leave, but the time was not right now to leave. Troy is a place that has won a lot of championships and has built a great program and is something that I want to be a part of right now.”

In his first year as offensive coordinator for the Trojans, Edenfield picked right up where former coordinator Neal Brown, who left for Texas Tech early in 2010, left off.

In the 2009 season, Brown helped the Trojans rank third in the nation in total offense, with 478 yards per game, and 18th in scoring offense, at 33 points per game.

However, Brown was never able to lead an offense to a bowl game victory, a feat Edenfield was able to accomplish this past Saturday in the New Orleans Bowl.

Against an Ohio Bobcat defense that only allowed an average of 22 points per game, Edenfield’s offense scored 48 points, and finished with 602 total yards on 72 plays.

After the bowl victory, Troy head coach Larry Blakeney said he was going to do everything in his power to keep his offensive coordinator at Troy.

“I’m going to fight to keep Kenny,“ Blakeney said following the bowl victory. “Let me make that statement. I’m going to try to recruit some help to fight to keep Kenny. He’s done a fabulous job. He’s a Troy guy. His family’s entrenched in Troy. It doesn’t make a lot of sense for us to let him go to Lafayette. I don’t care who’s down there. Jesus Christ can be down there as head coach and it won’t make a difference to me.

“What he’ll do is he’ll look at it and he’ll analyze it. He’ll do the right thing for him and his family. I’m going to try to help him do it. It’s a career decision and you’ve got to be careful with a career decision.“

As for what ULL did on offense during their 3-9 season in 2010, the Ragin’ Cajuns, finished 81st in total offense averaging 350 yards per game, 92nd in scoring offense with just around 22 points per game and 34th in the nation in passing offense, averaging 250 yards through the air.