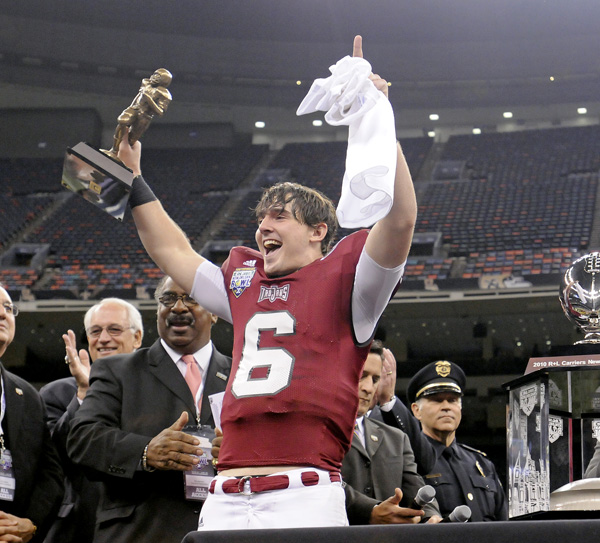 The last time the Troy Trojans were found celebrating on the sidelines after a bowl game was in 2006, thanks to its victory over Rice in the New Orleans Bowl.

Almost exactly four years to the day, the Trojans were back under the lights of the Superdome – and celebrating.

Christmas came a week early for Troy this year, as both the team and the fans were once again dancing on the field and in the streets of New Orleans thanks to its 48-21 victory over Ohio on Saturday night in the New Orleans Bowl.

“I really didn’t expect it to be like this. I thought we could win the game. I did feel a lot of energy from these guys as we prepared, going through the practices at home as then here. I figured the first team to get to the 30’s would win. They were a great team that played well all season long. But like I have said a lot, if we are playing well in all three phases of the game, we are a tough team to stop – and we played the best first half of football I think I have ever seen.”

During the first two quarters, everything looked easy for the Trojans in the Big Easy.

And by the third quarter, the game was all but wrapped up for the men of Troy.

Thanks to five-combined scores from senior receivers Jerrel Jernigan and Tebiarus Gill, Troy was able to jump out to a 38-7 score.

The Trojans tallied up 371 total yards to the Bobcats’ 79, while getting 21 first downs in the process.

Even though Ohio may have outscored Troy 14-10 in the second half, the Trojans still won by 27 points thanks to its play in the first half.

In his first career start in a bowl game, quarterback Corey Robinson shined, completing 32 of his 42 passes for 387 yards and four touchdown passes, earning him bowl MVP honors.

“They liked to man up on us and I liked our matchups with Jerrel and Tebiarus,” Robinson said. “They made me look good. It’s sad that they are leaving.”

In their final games as Trojans, Jernigan, Gill and running back DuJuan Harris contributed to the victory.

Harris rushed for a season high, 105 yards on the ground, including a two-yard touchdown.

Gill finished with 80 yards on four catches and three touchdowns, which set a new record in bowl game and Jernigan finished with 99 all-purpose yards, including a rushing and receiving score.

“We wanted to set the tempo early – we wanted to be fast,” offensive coordinator Kenny Edenfield said.

“I thought everyone came in really focused. You could see the guys were really preparing well for this game, everyone looked sharp in practice leading up to the game. They did everything right and the results showed that.”

One of the team’s top offensive contributors, Jernigan, almost did not play however.

Several days before the bowl game, Jernigan was sick with a virus that enabled him to take part in a lot of the team’s preparations, but it did not stop him from taking the field for his last game.

“I was nervous going in for him,” Edenfield laughed. “I wasn’t sure what he would be able to do.

“He is one of the toughest, if not the toughest, guys on the team. He also wants the ball in key situations, and I knew he was not going to miss this opportunity to play.”

The win improved Troy to 2-3 in bowl games and helped the Trojans finish the season on a three-game winning streak and 8-5 overall.

“Anytime you are able to wind up winning the last three games of the season and a bowl game in the process, you have done something pretty good,” Blakeney said. “And I think we played pretty good in each of those game.

“But that’s what we needed to do. We had to win those games if we wanted to get where we finished. There were a lot of things we had to deal with this season – a lot of things happened. But it just goes to show you the kind of effort our kids and coaches put out. They all worked extremely hard to get to this position, and everyone was rewarded. We had great leadership from the seniors. I’m really proud of everyone. This team ranks highly with all the championship teams that have been here.”