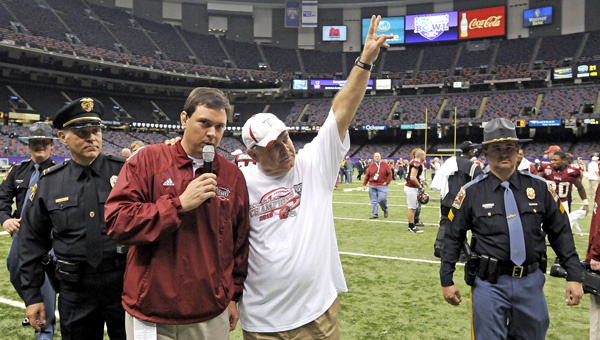 It was a little over a month ago when the Troy football team found itself in a troubling situation.

FIU had just taken control of the Sun Belt Conference thanks to a double-digit victory in Troy with only a handful of games remaining.

The Trojans were in a stretch where it had lost two of three games and was barely hovering above 500.

My, how much can change in a month’s time.

A month later, those worries were all but forgotten as the Trojans found themselves under the lights of the Superdome in its third visit to the R+L Carriers New Orleans Bowl, representing the conference as the champion, for a record fifth-straight time. 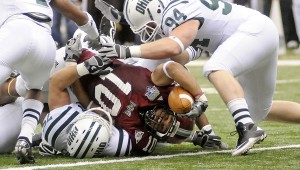 And unlike the 2008 New Orleans trip, the Trojans will be returning home with some hardware for the efforts on the gridiron.

In the first ever meeting with the Ohio University Bobcats, the Trojans wasted little time in dispatching its opponents as it cruised to a dominating 48-21victory.

“We’re certainly proud to be sitting here before you as the victors over Ohio University in the R+L Carriers New Orleans Bowl,” head coach Larry Blakeney said.

“We prepared well. I think our kids, after coming back off some really tough losses in the last half of the season, and then getting two wins and the help to get a co-championship, really helped us prepare well. I wanted to make sure it wasn’t just the excitement of being in a bowl. When we play three-phase football and we take care of the kicking game and don’t turn the ball over on offense and tackle well no defense, normally, we’re a very difficult team to beat.”

This was Troy’s second bowl victory in the program’s history, with the first also taking place in the New Orleans Bowl against Rice back in 2006.

If there was any question about which Troy team would take the field going into the game, those questions were answered almost immediately.

On offense, the Trojans were ruthless as it attacked the Bobcat defense through the air and on the ground, as it was led by two senior wide receivers.

Jerrel Jernigan made his presence felt early thanks to his 12-yard run that put his team up 7-0. 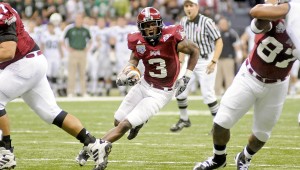 The Eufaula-native would find the endzone two possessions later on a 16-yard pitch and catch from quarterback Corey Robinson.

Gill scored on receptions of 31, 17, and 26 in the first half of his first New Orleans Bowl game, helping give Troy a 38-7 lead at the half.

In the first half alone, three New Orleans Bowl records were broken by the overpowering Troy offense.

The 38 points scored were the most in the the bowl’s 10 year history, Taylor’s field goal was the longest and Gill’s three scores were the most by any player.

Gill would finish with 80 yards on four receptions.

Defensively, the Trojans suffocated an Ohio offensive unit that was ranked in the Top 50 in points scored.

On the second play of the game, Troy defensive back Jimmie Anderson picked off a Phil Bates pass and quarterback Boo Jackson, who was one of the team’s leading rushers coming into the game, was sacked twice by Mario Addison.

Along with Addison, sophomore defensive end Jonathan Massaqoui got into the sack party, finishing with 2.5 for 18 yards.

He also led the team with eight total tackles, five of which were solo.

“Makes me feel proud to be a part of this organization,” Massaquoi said.

“We finished off strong today. The guys enjoyed themselves in New Orleans and we put on a big show. We showed the nation Troy’s here to compete.”

Not to be outdone by his teammates, Robinson continued his stellar play from the end of the season.

And that played resulted in the game Most Valuable Player Award when it was all said and done.

“They liked to man up on us and I liked our matchups with Jerrel and Tebiarus,” the quarterback said. “Those guys made me look good and it’s a sad day that they are leaving.

“The defense showed up and played very well (Saturday night). Jimmie’s interception was a huge momentum swing for us at the beginning of the game. There’s always mistakes being made, I’m just glad to get out of here with a win.”

Robinson finished the game completing 32-of-42 passes for 387 yards and four touchdowns.

“He spent two off-seasons and two springs with us before he competed for the starting job,” Blakeney said.

“I really think that competition meant a lot to him. He won it because he worked hard at it. Corey’s made mistakes, but he’s learned a lot from those mistakes.”

The 48 points scored against the Ohio defense was the most allowed all season, topping the 43 points given up to Ohio State back in the third week of the season.

The Bobcats defense came into the game allowing an average of 22 points per game, which was good for 34th in the nation.

This was the second-straight game the Trojans scored 40 or more points.

The loss for the Bobcats drops Ohio to 0-5 in bowl games.

“It was clear that we had trouble controlling them from the very start in terms of what they were all about offensively,” Ohio head coach Frank Solich said after the game.

“They pretty much threw at will. They made some big plays after the catch and that eventually opened up the ground game for them and so they had both of them going.”

This was the fourth ever meeting between Blakeney and Solich. 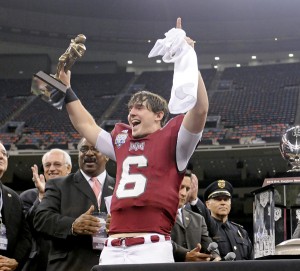 While Solich may have gotten the best of Blakeney’s Trojan team when he was the head coach of Nebraska in blow out victories, the tables were turned this time around.

“I have the utmost respect for coach Solich,” Blakeney said.

“He means an awful lot to college football.”

Even though the offense did not put up quite as impressive numbers in the second half, it was still effective enough to keep the Trojans ahead for the remainder of the game.

A DuJuan Harris two-yard run and another Taylor field goal were the final scores on the night for the Trojans.

“We went through a couple tough times this season,” Blakeney said. “There is no doubt about it, we really had to look at ourselves and figure things out.

“I think tonight we played the best half of football I have seen in a long, long time. Our guys came in ready to go and executed everything currently. I think to a certain degree we put it on cruise control but we had the right to do that with such a big lead.”

The end of the game meant the end of 22 Trojan careers – one of which will be remembered as one of the all-time greats. 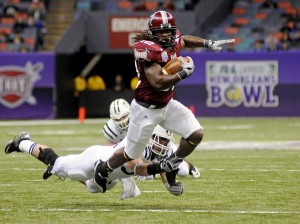 Coming into the game, Jernigan has been sick with a stomach virus, however, that illness was not evident on the field.

The 48 points scored were a season high for Troy and the most ever scored by a team in the New Orleans Bowl.