Owls shoot down Trojans in overtime 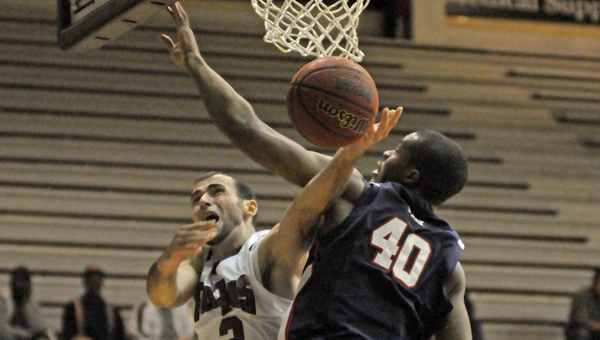 While 40 minutes was not enough to determine a final outcome of Troy’s game against Florida Atlantic Thursday night, 45 minutes was.

And in the end, it was the same result as the past seven games for the Trojans.

In the Sun Belt Conference opener for both squads, Troy was hoping its home-cooking would help snap a seven game losing streak.

But despite some big shots made in both halves, the Owls were able to take advantage of the Trojans in overtime, as the team from south Florida went on to win 82-77 in Sartain Hall.

“I thought we played a really good game,” Maestri said.

“To me though, in games like this, it’s not about anything that we are doing wrong but the other team making exceptional plays in big moments. That has happened to us a lot this season, and it happened again (Thursday night). Got to give credit to FAU, they did the right things to win the game.”

That big play the coach talked about came from Owl guard Raymond Taylor.

With 53 seconds remaining in the game, Taylor hit an off balanced 3-pointer as the shot clock was ticking down, giving his team a 78-75 lead that it would not relinquish.

After hitting on only 40 percent for the first two halves, Taylor made both of his attempts from beyond the arc in overtime, proving to be the difference.

The loss drops the Trojans to 1-8 on the season and 0-1 in conference play.

“I thought our guys played hard all the way through. I think we have been getting better the last three weeks or so, but we are stilling searching for that good feeling,” Maestri said.

For much of the game, the score was close as neither team could find a way to pull away.

In the opening minutes of the second half, it was the Owls who again took control of the game, scoring a 10 unanswered points in the opening five minutes.

From there, the Trojans bounced back, to take a 46-45 lead with 13 minutes in the game.

FAU would not take the lead until two minutes left, thanks to a Taylor 3-pointer.

But Troy would have an answer thanks to a Regis Huddleston 3-pointer with just 29 seconds left.

The two teams would enter overtime tied at 68 before FAU put the final dagger in the home team.

“We work so hard day in and day out. We finally get home, we play hard and in the end we don’t come away with a win. I think both teams played hard (Thursday night), but (FAU) were the team that got it. And to be part of that again is tough to deal with.”

“When you are playing defense at your best and you are doing everything to stop the other team, and they hit a shot that was just thrown up in the air, it really takes a lot out of you,” Taylor went on to say.

“This was a must win game for us, I think. And we didn’t get it done.”

Senior forward Levan Patsatsia led the way for Troy with 21 points and 10 rebounds, while Shawntez Patterson and Huddleston both finished with 10 and 12 points, respectively.

“I thought FAU played extremely well,” Patsatsia said. “But I thought we were playing hard too.

“I thought we as a team did a lot of good things on the court, and I think we are getting better each day. It’s just a matter of putting everything together for a complete game. This was a big game because it was a conference game. If we would have won this game, it would have made all the difference in the world.”

The Trojans will finish up a two-game home stretch on Saturday as it looks to move past Thursday’s loss against Belmont.

“We are clicking more and more each day,” Taylor said. “At the beginning of the season, we weren’t really together, but if these losses have done anything, they are brought us closer and that’s going to help us in the long run.”