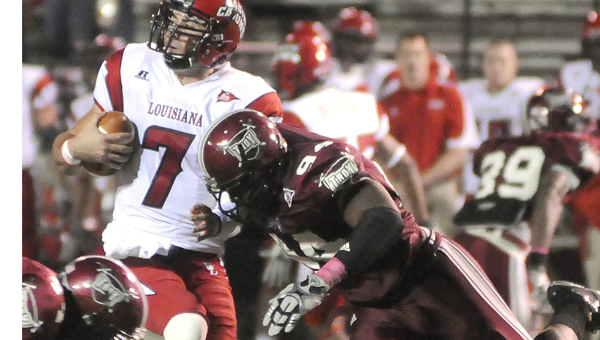 Preparing for any offense is a tough job for a defensive coordinator.

However, preparing for a top offense in a short amount of time makes that job a little more tricky.

But that is the task at hand for Troy defensive coordinator Jeremy Rowell as he get his players ready for Ohio in the New Orleans Bowl.

“We are planning for Ohio very carefully,” Rowell laughed.

“They do a good job of what they do. They are a run oriented team that will mix some spread (offense) every now and again. Plus, you have to worry about their dual quarterback threats. The main thing for us is creating blitz packages that will enable them from being able to do what they like to do. We want to create problems for them all over the field and really attack them as much as we can.”

While Rowell said the defense could always get better, it cannot get much better then how it has performed in the final two games of the regular season.

After giving up 121 points in two games to FIU and South Carolina, the defense returned to form from seasons past, giving up just 21 points to Western Kentucky and Florida Atlantic.

In the past six quarters, the Trojans have only allowed seven points.

“It was a very big confidence booster for our guys,” he said.

“We finally got guys practicing and playing in the right positions. There had been so much turnover defensively between guys leaving and injuries that it really effected what we were trying to do. But I think we finally got into a rhythm with our guys towards the end of the season and that’s when you could really see the defense playing well. Consistency is a huge thing for us. Building upon repetition. We have gone back to a basic defense and it has worked out well for us.”

Both Rowell and the Trojans hope for more of the same against an offensive unit that has put up some impressive numbers over the course of a 12 game span.

While the Bobcats finished 94th overall in total offense with an average of 327.58 yards per game, it’s running attack was ranked in the Top 50, averaging 169.17 yards on the ground.

Add that to the 28 points per game the team averages and the Trojans are looking at a formidable opponent.

Senior running back Vince Davidson led the Owls’ running attack with 509 yards and six touchdowns, while junior quarterback Phil Bates finished just one yard shy of Davidson with 508 yards rushing and one score.

“(Ohio) does a good job of spreading the ball to their guys,” Rowell said.

“They have wide receivers with good size, running backs who always find a way to get positive yards and quarterbacks who do a good job of directing through traffic.”

Before Troy can get to those players however, it will have to get passed an offensive line that is made up of several of the MAC’s best lineman.

“All three areas are going to be key for us if we want to stop Ohio,” Rowell said.

“But just like the offense, the defensive strategy is the same – we got to win the up front battle.

“We have to be able to break through the line and be able to get to the position players. That’s going to be a big key for us and something we have been able to do the last couple of games.”

One of the big reasons for that success up front, and for a large majority of the season, has been thanks to the play of redshirt sophomore Jonathan Massaqoui.

Through 12 games this season, the first year starter has been a destructive force against opposing players.

Massaqoui also leads the team in sacks with 11.

“Jonathan has had a great year for us,” Rowell said. “Hopefully, that great year can continue on Saturday.

“He has been a catalyst for us, there’s no doubt about it and a player that has really gotten the other players to play harder. His play has been contagious for our guys.”