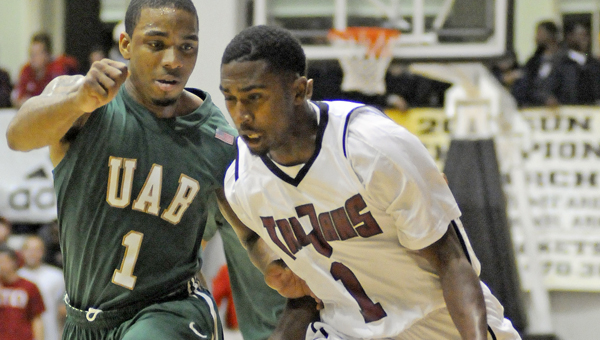 Troy University's Will Weathers (1) drives the ball during an NCAA basketball game between Troy University and UAB in Troy, Ala., on Monday, Nov. 29, 2010. UAB defeated Troy 78-57. (Messenger Staff Photo/Thomas Graning)

For the first time weeks, the Troy men’s basketball team will be playing a game in the friendly confines of Sartain Hall.

And in doing so, the Trojans will be diving into the games that really matter – the Sun Belt games.

The first conference opponent in line is the Owls of Florida Atlantic, who are currently 6-5 and like Troy, stepping into Sun Belt play for the first time this season.

However, unlike Troy, FAU is not currently riding a seven-game losing streak.

The Trojans most recent fall came on the road to the hands of Miami (OH) this past Saturday.

In that game, Troy had a nine-point lead with less than six minutes remaining before the Redhawks went on a 9-0 run to tie the game, and used an 9-2 run in the final four minutes to put the Trojans away, 80-73.

“What it really came down to was Miami (OH) was able to make four big shots in a row in a key part of the game,” head coach Don Maestri said.

“It wasn’t anything that we didn’t do – they just made all the shots they needed to make. The score is not really indicative of the final outcome. We were in a situation where we had to foul to get the ball back and try to get back into the game but they kept hitting their free throws.”

Despite the loss, Maestri said it was the best shooting night of the season for his team.

“I thought offensively, we played as well as we have all season long, believe it or not,” the coach said. “It was probably our best game of the year.

“But as it turned out, we caught them on a very good night as well, which didn’t help us. It’s a little disappointing to have a lead late in the game like we did and then to lose it the way we did, but it is something else that we can learn from.”

Troy shot 44.6 percent from the floor in the game, including 46.2 percent in the second half and also shot 52 percent from beyond the 3-point line.

Now, the Trojans will look to keep the sharp shooting around as it stares both the Owls and conference play directly in the face.

“I think the main thing is the guys aren’t looking back,” Maestri said. “We all have been through enough to realize you can’t let the past effect the future. The only thing to focus on is the future, like I have talked about before. There has not been a change in the guy’s mind set or how they are performing in practice.”

But despite a 1-7 record, the head coach said there is nothing to worry about.

“This is not a must win game for us,” Maestri said the FAU game. “But this is the top team in our division and maybe the conference.

“They have an experienced team with a lot of their top guys coming back from a season ago. They have come into this season with high expectations and there is a good chance of them meeting those expectations.”

The Trojans are 19-6 all-time against the Owls.

Last season, the two teams split the meetings with each other, with both winning on their respective home courts.

Leading the charge for the Owls is head coach Mike Jarvis.

The head coach took over two seasons ago after spending six seasons with the St. John’s Red Storm.

“I think Mike has done a fantastic job with this team,” Maestri said. “And they are only going to get better.

“He has a lot of players that can do a lot of good things and we are going to see that in person (today).”

In Jarvis’ arsenal are players that can put up big points and can also defend the ball well.

Brett Royster, who is the reigning Sun Belt Defensive Player of the Year, is coming off a career high with seven block shots against Siena on Monday night, and through 11 games this season, he already has 35 blocks, which leads the Sun Belt.

The Owls also have sophomore guards Greg Gantt and Korey White, who are leading the team in scoring with 14.8 points per game and 9.5 points per game.

Gantt has hit 23 3-pointers so far this season and White is averaging nearly five rebounds a game.

“FAU has more experience coming in then we do and they are probably bigger in side then we are, but not by too much,” Maestri said.

“Plus they have some of the top shooters, who are fast, kind of like what we had last season. We are going to have to play the best game we have all season against this FAU team.”

The Trojans and the Owls will get things started at Sartain Hall with a tip-off scheduled for 7 p.m.