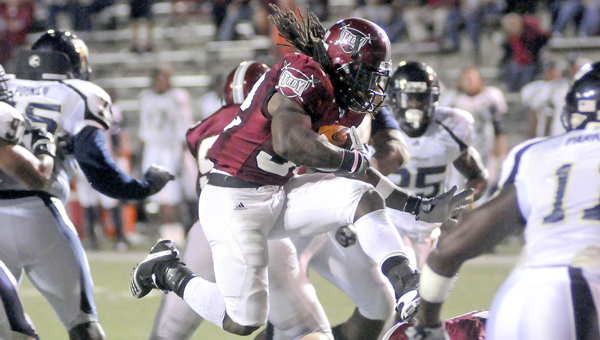 Troy running back DuJuan Harris (32) runs the ball for touchdown during the second half an NCAA football game in Troy, Ala., on Saturday, Nov. 13, 2010. (Messenger Staff Photo/Thomas Graning)

There are several interesting story lines going into the 2010 New Orleans Bowl.

At the top of the list may be the familiarity between the two teams.

And while this may be the first time the Trojans and the Bobcats will be meeting on the gridiron, the two head coaches of the teams have seen each other three times before.

From 2001 through 2003, Larry Blakeney and the Trojans took on Frank Solich, who was then the head coach of Nebraska.

“I have a lot of high praise for coach Solich,” Blakeney said. “Because of what he stands for and the outstanding job he has done throughout his career.

“He is a man that truly knows the game of football and loves it. It takes a lot to be fired from your alma mater after a 9-2 season and not whimper about it. But that’s exactly who he is – he is a special guy.”

Even those few games against the Cornhuskers all ended in losses for Troy, they can now possibly help the Trojans prepare for what to expect – or so one would think.

In actuality, Troy will know what is coming because of much closer relationships, however.

“There are some similarities between his Nebraska teams and his Ohio teams, that I have seen,” Blakeney said.

“Both are physical and quick. I’m just hoping that he left his Nebraska players there and didn’t bring any of them over to Ohio,” the coach laughed.

“Either way, he knows what he is doing. They are going to run different looks on offense at us with their running game and the option. But really, they look a lot like what we do on offense. And defensively, we lineup very similar to each other.”

And there is a good reason why the two teams have similar looks and styles on the field, especially defensively.

Along with Blakeney and Solich, the assistant coaches on both squads are familiar with each other, as the two have shared defensive ideas with one another for the past couple of seasons.

“We have studied with each other in the past,” Blakeney said. “We know them pretty well.

“(Troy linebacker coach Benjy Parker) knows a lot of the guys up there and they have talked defenses every now and again. I think both teams are pretty evenly matched up, but it’s hard to say if there will be an advantage (because of the strategy knowledge shared). I know they play hard and if we want to win, we are going to have to play just as hard.”

What could differentiate the Trojans from the Bobcats is what the Men of Troy do on offense.

For a large majority of the season, the Trojans’ offensive unit has been able to score a multitude of points in a short amount of time.

Going into Saturday’s bowl matchup, offensive coordinator Kenny Edenfield is hoping for more of the same.

And they are preparing for it just as they would any other game,

“This is really just another game for us,” Edenfield said. “Obviously, going to a bowl game is a privilege and one that we are all very thankful of but we are looking to do the same thing we have done all season long (against Ohio).

While the Trojans may know what’s coming with the Bobcat defense, it still has to prepare for defenders that make up a squad that allows on average 332.67 yards per game, which is good enough for 28th in the nation, as well a run defense that only allows 115 yard per game, which is 14th best in the county.

“We have watched a lot of tape on them,” the coach said. “And it is never easy to pick a part a Top 30 defense like there’s. But if we keep the tempo up, the same kind of tempo we have been playing at all season long, we are going to find some success.”

On the contrast, the Trojan offense has scored 30 or more points nine different times this season, with three of those times going over the 40-point plateau.

“We are going to do what we do,” Edenfield said.

“We know we have an offense that can do a lot quickly, but the main thing is making sure our kids stay focused throughout the week. A lot of them have been a part of bowl trips, specifically in New Orleans. This is a game that can really dictate a class’s legacy. The seniors that won a bowl game a couple of years ago know that, and I know a lot of these guys want to go out with a win. They are going to be focused on the task at hand and they are going to do what they have done all season long come Saturday.”