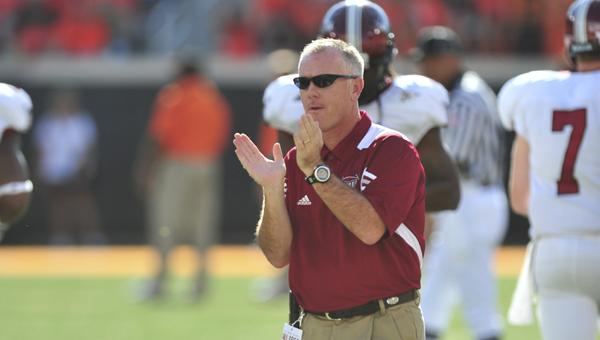 Over this past weekend, Louisiana-Lafayette announced Mississippi State assistant coach Mark Hudspeth would be the new head coach of the Ragin’ Cajuns.

And while this has really no effect on the Troy Trojans, it may in the near future.

One of the men Hudspeth would like to help make the ULL program a contender is one that is already a part of a championship caliber team, and also a good friend and former co-worker.

Prior to coming to Troy, his alma mater, as the wide receiver coach back in 2008, Kenny Edenfield was the offensive coordinator at North Alabama under Hudspeth from 2002 up until the 2007 season.

ULL is also a little less than two hours away from the Troy coach’s hometown of Clinton, La.

“I have made no decision and won’t until after the bowl game,” Edenfield said Monday afternoon about the departure rumors.

“My main focus is right where it should be right now – working on a strategy to help Troy win a bowl game.

“This is a big decision. I think everyone knows how much I love Troy. My family and I have been visiting Troy even before we lived here. My wife is from Troy and my kids go to schools in Troy. We are very close to the people in this community and they mean very much to each of us. This decision will be made based on what is best for my family. There is not a better place to be than at Troy, and this is the place I have wanted to be at for a long time but this is something that I am going to think about and pray about. I feel like this is something I have to look into, so my family and I will.”

North Alabama won two conference championships while Edenfield and Hudspeth were together, and also went to the playoffs four different times.

He was one of two assistants who had been on Hudspeth’s staff every season since he arrived at UNA in 2002.

This season was the first for the Endenfield as Troy’s offensive coordinator.

And in his first 12 games at the position, he has led the offense to some impressive numbers nationally.

Troy is also currently 12th in the nation in passing offense, averaging 289.75 yards per game.

As far as the conference goes, Troy is No. 1 in each one of the categories.

If Edenfield would decide to leave the program, head coach Larry Blankeney would be on the search for an offensive coordinator for the second-straight year and second time in four years.

But according to the head coach, he is going to do everything to make sure his guy stays a Trojan.

“Well, obviously, he has been contacted by ULL and they have contacted me for permission to speak with him,” Blakeney said. “And after the bowl game, he is free to do so.

“But I am going to do everything I can to keep him here in Troy. He is as good as we have had here in the last couple of years. He is a coach who is innovative, familiar with the players and very team oriented. All those things are extremely important. He has done an outstanding job for us here and I want to keep him here. He has a lot of ties in the Troy community with his family, and I think that plays a big part. I hope he decides to stay though, he is definitely a coach that no one from Troy wants to see leave.”

While Troy may be looking to keep its offensive coordinator, the team’s quarterbacks coach has already decided to leave the program for another opportunity.

Chip Lindsey, who came to Troy from Lassiter High School outside of Marietta, Ga. earlier this year, has accepted the job as the head coaching position at Spain Park High School in Hoover.

Lindsey will stay with the Trojans through the Saturday’s R+L Carriers New Orleans Bowl.