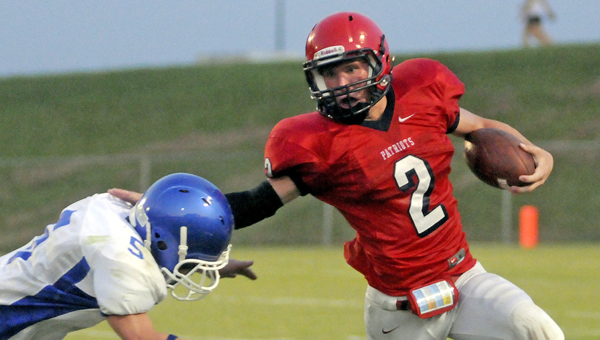 While the football season for the Pike Liberal Arts Patriots may have ended close to a month ago, four players from the team got to play in one last game.

Seniors Taylor Stephens, Andrew Quincey, Dylan Richards and Jackson Nelson were all selected to the 41st AISA All-Star Football, which took place on Dec. 2 at Stanley-Jensen Stadium in Prattville.

“It was a lot of fun for sure,” Stephens said about being selected to the game. “It definitely means a lot to be a part of that team with those players.”

“It’s a big honor to be looked at like that by your opponents,” Nelson added.

While the four Patriots were planning on just focusing on football, they all said that something else happened during the three-day trip.

“We hung out with a lot of the kids we played against,” Richards said. “I didn’t really think that would happen, but it was a lot of fun.”

The new friendships were developed thanks to the power of small, electronic device – the X-Box.

“We practiced football and played video games,” Quincey said. “It was a fun three days.”

This is not the first time a Quincey family member had been a part of the game,” however.

Before Andrew, his older brother Phillip was a part of the team two years ago.

“Me brother told me to get out and hang out with the other guys, and that’s what we did – and it made the whole trip that much better, I think.”

The quartet of Patriots were not alone though, as PLAS head coach Steven Kilcrease, made his third-straight appearance as a coach in the annual game.

“I think it was a pretty big honor for those four to be selected, especially out of the group of guys we had on the team this season,” Kilcrease said. “It’s always a fun time up there. And it’s always fun to see our guys play with the best around. A lot of the guys will go up there thinking they are only going to hang out with the group from their school but in the end, they are hanging out with some of their biggest rivals during the season. The kids they may have had some animosity towards during the season become their best friends. So to see that is always a pretty cool thing.”

Over the last three years, the coach said close to 13 Patriots have represented PLAS in the All-Star game.

“That kind of backs up something I have said for a while, you’re only as good as your players. We are very fortunate to have the kind of players that we have had here. I think that shows a lot about the kind of program we have here as well. These kids are working hard and their hard work is paying off.”