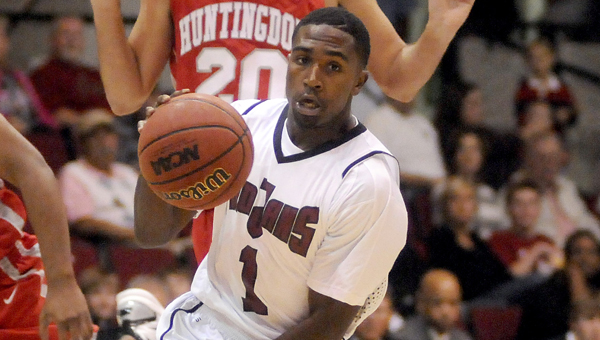 Sophomore guard Mo Weathers drives the ball down the court during the Trojans’ home opener against Huntingdon College.

It was a year ago when the Troy Trojans men’s basketball team was gearing up for a run that would take them all the way to the top of the Sun Belt Conference and to a regular season title.

A lot has changed in a year’s time for the Trojans.

Now, jumping back to the present, Troy has started off the current season with a 1-6 record and is still facing a tough conference schedule once the New Year comes around.

But both the past and the future are of no concern to head coach Don Maestri.

All the coach is focused on is the present and that’s the new philosophy he and his team will be taking on for the remainder of the season.

“This team is living for now, and nothing else,” Maestri said. “The present is the most important thing happening for us and that is what we are telling the guys. No matter what, we are not going to be concerned with what happened in the past or what will happen in the future. If you do that, there are too many distractions. There are a lot of guys on this team who have diamond rings from last season and I’m sure this season has been a little disappointing up till this point but this season’s team is all about the now.”

Currently, the team is working on fixing a problem that has plagued it for almost the entire season – poor shooting.

As of Wednesday, the team was shooting at just above 41 percent from the floor and just below 34 percent from beyond the arc.

And while the team has been working on fixing those issues, the inability to shoot just became a little more complicated thanks to the reinjury of guard Travis Lee’s left knee.

The senior, who has already miss significant time this season due to surgery on the knee, will miss another two to three weeks, according to the coach.

“We hope to start shooting the ball better,” Maestri said. “We have these dry spells where we can’t hit a shot.

“When we are playing good teams like we have been, you can’t have those moments in the game where you aren’t scoring. You get down big, and then it makes it tougher to find a way to win when you are playing from behind. But that’s the situation we have found ourselves in lately and one we have to fix.”

To go along with the injury to Lee, the Trojans have been without sharp-shooting forward Flynn Clayman all season long, as the timetable set for his return to the court coming sometime after Christmas.

“Even though we are into December now, we still don’t have our full team,” the coach explained.

“Injuries have really made a difference this season. It would be kind of like if (Auburn quarterback) Cam Newton got hurt – that makes Auburn a completely different team.

“Injuries are something that I have been fortunate enough to not have to deal with until this season. But they are a reality of life. It’s not something the team is using as an excuse, but rather something we have to overcome.”

The team’s schedule has also been a determining factor in the current slump.

Not one of the six teams the Trojans have lost to this season has a losing record.

In the next six games, Troy will face three teams with current losing records in Miami (OH), Western Michigan and Idaho State, with the last two games taking place in the World Vision Basketball Invitational in Logan, Utah.

“We don’t have any games where we can rebound off of a loss,” Maestri said. “There are no games right now where we can get back the good feeling right away.

“That has been a huge challenge for us, but again, that’s why we are now focusing in the present. We can’t allow what has happened in the past to effect how we play now.”

But even with all the challenges and issues staring the team directly in the face, the coach said these times are making bringing out a competitive fire within the team.

“Will they break out soon? I don’t know,” Maestri said. “But if they do, that is an accomplishment we can build off of.

“Either way, going through these tough times is providing experience to these guys. I believe that you find out a lot about yourself when you are going through tough times. We know that we have the same kind of family atmosphere with this team that we have had with other teams and each guys is working to help get everyone better. Hopefully, we will be able to turn things around soon.”