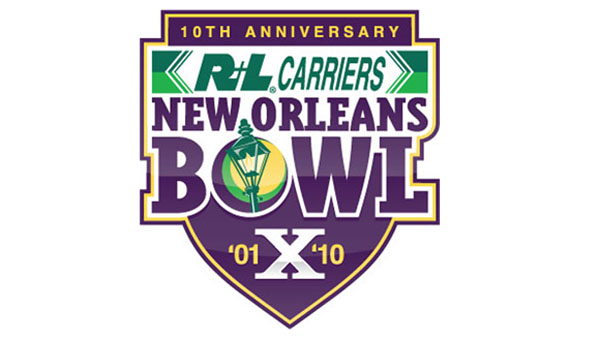 For the third time in five years, the Troy Trojans will be making a trip to New Orleans to play in the R+L Carriers New Orleans Bowl.

For the third time in five years, the Troy Trojans will be making a trip to New Orleans to play in the R+L Carriers New Orleans Bowl.

The game will take place on Saturday, Dec. 18, with a kickoff scheduled for 7 p.m. against Ohio University, who comes out of the MAC conference.

“We just accepted the New Orleans Bowl bid, and it is a pretty exciting time for the players, the fans and the university,” head coach Larry Blakeney said Sunday afternoon.

“You know, I’m not a real picky person. We had such a good time with Mobile last year. But our first bowl in the Sun Belt was in New Orleans, and we had been back one other time since then. A lot of our people wanted to go back to New Orleans. Either way, there were two great opportunities for us to go to, but to be going back to New Orleans is something that I am excited about it for our kids and people.”

This is the first time Troy will play in the Superdome since the 2008 season, when it took on Southern Mississippi.

In the New Orleans Bowl, the Trojans have a all-time 1-1 record, with in 2006 against Rice.

The Trojans finished this season on a two-game winning streak, clinching its seventh victory of the season on Saturday thanks to a 44-7 beat down on the road over Florida Atlantic.

The Bobcats of Ohio finished 8-4 on the season, and will enter the bowl game coming off a 28-6 loss to Kent State.

Tickets to the game will be discounted for Troy University students

Troy students must pick up their tickets, in person, from the Athletics Ticket Office with a valid student identification. Students can only purchase one ticket for the game.

As far as Troy’s opponent goes, the coach said he is pretty familiar with what Ohio brings to the table.

What will make the matchup even more interesting is the amount of time both teams have to prepare for the bowl game.

“Well, last year at this time, we were waiting around a month to play, and this year it’s not nearly as long,” Blakeney said.

“One is too long and the other one is too quick,” he laughed. “Both are great experiences though. We are just glad that we have those two great places.”