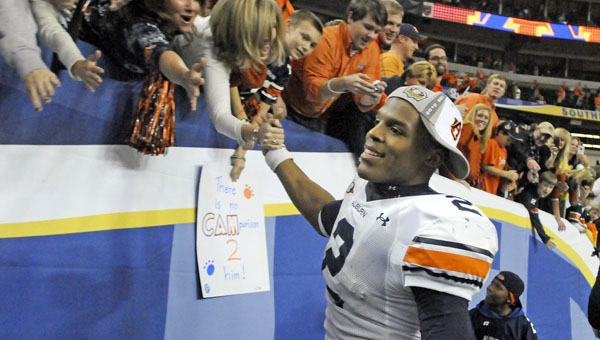 One down, one to go.

It’s been a season of destiny for the Auburn Tigers.

Week in and week out, the team has fought its way through one of, if not the, toughest conference in the country, large deficits and NCAA and FBI investigations.

Each week, Auburn found a way to stay perfect. Now, the season finally has a finish line in sight.

And it happens to be the 2010 National Championship as the No. 1 ranked Tigers stamped their tickets to Glendale, Ariz., thanks to a dominating 56-17 win over the South Carolina Gamecocks.

“I couldn’t be more proud of our football team and our fans deserved this,” Auburn head coach Gene Chizik said. “The Auburn family deserves it.

“Our football team has been probably one of the most resilient group of young men I’ve ever seen in my 25 years of doing this. Everything they got (Saturday night), they deserved.”

While the SEC Championship game was a rematch of a September showdown between the Tigers and the Gamecocks in Auburn, the similarities between the then and now were few and far between.

With the exception of one thing. 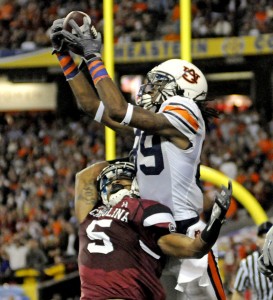 Auburn quarterback Cam Newton proved to be the difference in the game that took place nearly two months ago, and as it turned out was the same player that made all the difference on Saturday.

Despite facing allegations of all kinds heading into the game, once Newton stepped on the turf at the Georgia Dome it was obvious who the best player on either team was.

In the first quarter alone, the Heisman Trophy hopeful showed off both his arm and his legs.

In Auburn’s first three drives of the game, the Tigers would cross the goal line with the quarterback having a say in each one.

After finding Onterio McCalebb in the end zone for a 12-yard touchdown pass, putting his team up 7-0, Newton would score on a five-yard scramble and then hit Darvin Adams on a 54-yard pitch and catch.

It wouldn’t get any easier for the Gamecocks either.

After a rough second quarter that saw USC struggle to do anything with the ball, the SEC East champions got on the board when Stephen Garcia found Alshon Jeffery for a 1-yard touchdown pass to cut the score to 21-14 with just 16 seconds remaining in the half

That’s all the Tigers would need to put seven more points on the board.

With seven seconds remaining in the half, Newton would find Adams again, this time on a 51-yard Hail Mary pass, putting the Tigers up 28-14 and in complete control of the game.

“That play was one that we had practiced a lot,” Newton said. “Repetition played a big role in that play being successful.

“When it came down to it, Darvin did an excellent job of tracking down the football, finding it and making the catch.”

While many may have been surprised by the Tiger’s decision to score one more time before the half, the team was not.

“We knew that Cameron could make that throw,” Chizik said. “We had seen him do it in practice all the time.”

And as it turned out, that pass was the turning point in the game, according to the head coach.

“That was a huge momentum swing for this game,” Chizik said. “We had a shot and we took it.” 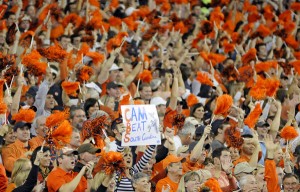 Auburn fans cheer during the first half of the 2010 SEC Championship between Auburn and South Carolina in Atlanta, Saturday, Dec. 4, 2010. (Messenger Staff Photo/Thomas Graning)

Having the best college player in the country however makes that decision a little bit easier.

“I have never seen a better college football player than Cameron,” the Tiger head coach said.

“I have never seen anything like what he has been able to do in a 13-game span – he is the best player I have ever seen.” 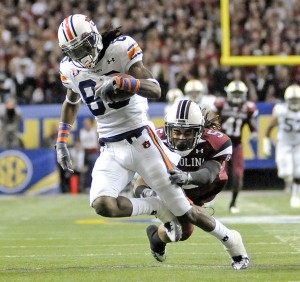 In the second half, that aforementioned momentum played a huge role for both teams, as the Tigers cruised through the final 30 minutes, and the Gamecocks fizzled away, only scoring a Spencer Lanning 33-yard field goal with 3:26 remaining in the game.

“The defense really struggled and offensively, we had some opportunities the first half, and then there’s the second half,” USC head coach Steve Spurrier said.

“Maybe if we played these guys ten times, they may win nine of them or more, who knows. It just didn’t happen for us. We needed to play a really, really good game and we weren’t even close to that. Give Auburn credit, I think they have a chance to win it all, if they play like this.”

Out of the eight Auburn touchdowns, six involved Newton, who was named the game’s Most Valuable Player.

A T’Sharvan Bell 10-yard interception return for a touchdown and a Mario Fannin six-yard run were the only non-Newton touchdowns, both of which came in the second half.

When the game had ended, it was the Auburn players who were found singing the Billy Withers classic: “Lean On Me,” with the fans.

The Tigers finished with 589 total yards of offense, on 71 plays while the Gamecocks had just 359 yards.

Newton finished with 335 passing yards, and 78 rushing yards to go along with a six touchdowns which tied a SEC Championship Game record, set by Florida quarterback Danny Wuerffel, back in 1996.

The 408 yards of total offense by Newton was the second most, to another Tiger quarterback, Jason Campbell who has 431 back in 2004.

“I’m a quarterback, and that’s a football player as simple as that,” Newton said.

One statistic that stood out maybe more than the yardage was the third down conversions, as Auburn finished 9-of-12, out doing USC, who converted on just 5-of-12 third downs.

“I think the third down conversions were huge today,” Chizik said. “Any (USC) is one of the tops in the leagues in being able to convert third downs. That was one of our goal going into the game.”

Playing a big role in the defensive effort for the Tigers was cornerback and Troy-native Zac Etheridge.

“This is an absolute blessing,” the senior said after the championship victory. 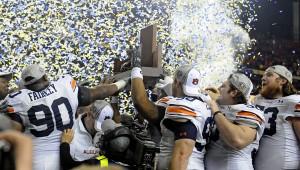