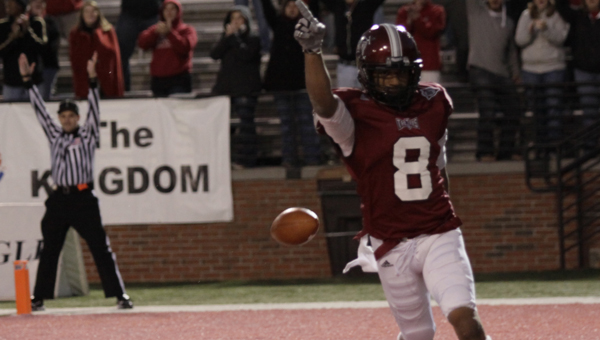 Chip Reeves celebrates after his second touchdown catch of the game, which gave the Trojans the lead for good against Western Kentucky. Photo/ Jeremy Coté

Some games are simply ones that must be won.

The Troy Trojans were facing that scenario Saturday in their last home game of the season against Western Kentucky.

Coming into the game, the Trojans had lost two-straight and remained just one win shy of becoming bowl eligible.

When it was all said and done at Veterans Memorial Stadium, the Trojans got that elusive sixth win of the season, beating the Hilltoppers 28-14.

“Well, I was concerned with this game,” head coach Larry Blakeney said.

“I talked to (WKU head coach) Willie Taggart before the game about how he had the energy going in the right way and how he has his team playing hard.

“But with that being said, I want to credit our coaches for the jobs they did. The players and the coaches have been questioned a lot lately and I think they really gutted it out. I’m proud of them for playing hard and playing well – we got after it (on Saturday).”

One of the biggest question marks heading into the game was the Troy defense, as the unit had allowed 121 total points, a new school record, in the past two weeks.

However, even though things got off to a rough start for the defense, it would play a big role in helping the team get above .500.

The Hilltoppers were the first to cross the goal line thanks to a Bobby Rainey nine-yard touchdown run with a little under seven minutes in the first quarter.

On the ensuring Troy possession, the home team would get on the scoreboard thanks to a nine-yard of their own, as Chris Anderson tied things up.

It was again Rainey who answered the call for WKU, this time scoring on a five-yard run, to again give his team a seven-point lead to start off the second quarter.

Six minutes after the go ahead WKU score, Robinson would connect with Chip Reeves on a 38-yard touchdown reception to tie things up at 14 all.

While the Trojan defense struggled at times in the first half, allowing several big Hilltopper plays, the same could not be said about the final two quarters.

After allowing 157 yards of offense, the defense would shut down WKU for good, giving up just 100 yards in the second half.

“We didn’t start off well,” defensive end Mario Addison said. “But we picked it up.

“We were playing for a purpose. You got it in your head that if you can do it, you will do it. We did it.”

That momentum would carry over from one side of the ball to the other in a big way.

With the score still tied early in the fourth quarter, Robinson and Reeves would find each other again, this time for a 47-yard pitch and catch, that would be good enough to give Troy the lead for good, at 20-14.

The Trojans would not stop there, as Shawn Southward would put Troy up 26-14 with under five minutes to play.

Jerrel Jernigan would find Tebiarus Gill in the back of the endzone for the 2-point conversion, giving Troy a 14-point lead.

“Our senior guys were telling us that we needed to put something together, to get points on the board and our defense would stop them – and that’s what we were able to do,” Robinson said.

“I felt like in the fourth quarter, we came together.”

“We are still shooting ourselves in the foot way too much with penalties and turnovers,” the quarterback said.

“But to get this win feels so much better. To become bowl eligible is a great feeling, especially after the whipping we got last week against South Carolina.”

In his final home game, Jernigan did just everything he could to help his team get a victory.

“I’m not a big talker in the huddle,” Jernigan said.

“It was Jason (Bruce) and Tebiarus (Gill) who were doing the talking and telling the guys that we needed to go out and go out with a win.

“This was a wonderful game,” the senior added. “This is how I wanted to go out. I want to thank all my coaches for helping put me in this position.

“Anytime you are able to get a win, it’s always a good feeling for us. This was a big win for us, we are bowl eligible now and that’s what we were hoping for coming in.”

Jernigan finished the game with six receptions for 89 yards.

But in the end, it was Reeves who had the biggest impact on the big win, thanks to his two touchdowns.

“We got in the huddle and Corey said he was going to throw it to me, and I said I was ready,” Reeves said.

“I think this was the play that was the spark for us in the fourth. We needed something to get us going and we got it. (The offense) really played off our defense though, they helped (the offense) out a lot actually. The whole team prides itself on the defense.”

Reeves had four catches for 96 yards and two scores.

In all, the Trojans finished with 481 yards of offense, the most since the Middle Tennessee game.

Troy also had 26 first downs, to go along with 187 rushing yards, 81 of which came from Shawn Southward.

“This was a good conference win for us,” the coach said.

“Six wins gives us a chance to start to talk about bowl games, but seven wins would make things a little sweeter for us. Going to FAU (next week) and winning in that stadium is not going to be easy to do. We will enjoy this win for 24 hours and get back to work on Sunday to get ready.”