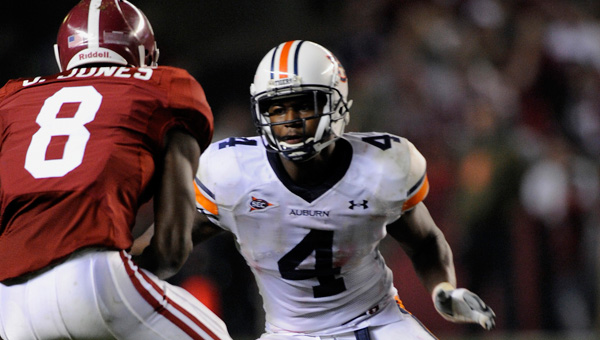 Troy-native Zac Etheridge looks to tackle Alabama wide receiver Julio Jones during the 2008 Iron Bowl, which took place in Tuscaloosa. In that game, Etheridge led Auburn with 11 tackles. Etheridge and the Tigers will head back to Bryant-Denny Stadium today.

The day after Thanksgiving is always a memorable day for people across the country.

For residents of Alabama, it is a day where the state is truly divided.

The annual rivalry match between the Auburn Tigers and the Alabama Crimson Tide is always one of the most anticipated games of the season.

But while it’s one thing to watch the game, it’s a completely different feeling to be one of the players battling it out on the gridiron.

For the third time in four seasons, that is exactly what Troy-native and Auburn cornerback Zac Etheridge will be doing.

The senior will be returning to action in the rivalry game for the first time since the 2008 season after a severe neck-injury ended his season on Halloween last year keeping him out of action.

That year away from the game was one that helped fuel Etheridge’s desire to get back to the field, and more importantly, get back to Bryant-Denny Stadium.

“This is what you come to Auburn for,” Etheridge said about the rivalry game.

“You are always preparing for this game, but I think this year’s game is going to be even more special. This is my last one. This is my home state rivalry game. I always looked forward to this game every year growing up and to be a part of it the past couple of years has been unbelievable.”

Growing up in Pike County, Etheridge competed in another heated rivalry, and one that he said is very much like the annual Iron Bowl meeting.

“There is really nothing like it (playing against Alabama),” he said.

“It’s the game that you want to win the most. It’s a lot like when I used to play Pike County. That was one of the biggest games of the season. Everyone knew everyone in that game and we all wanted to beat each other. That’s exactly what the Iron Bowl is like.”

In two previous meetings against the Crimson Tide, the Tiger defender has put respectable numbers.

In the 2008 game, Etheridge led Auburn with 11 tackles, which was a career-high.

And in the year before that, the cornerback finished with six tackles.

Having missed last year’s game due to the neck injury, Etheridge said, this season’s matchup is going to be special for him.”

“Last year, it hurt not to be able to play in that game at home with my teammates. I wanted to be out there more than anything. But now, I’m back. Alabama beat us last year and to be able to get back on the field and help my guys try and beat them, on their own field, and continue to stay undefeated is what I am most looking forward to.”

Etheridge and the Tigers will look to snap a two game losing streak to the Crimson Tide today in Tuscaloosa, with a 1:40 p.m. central time kickoff.