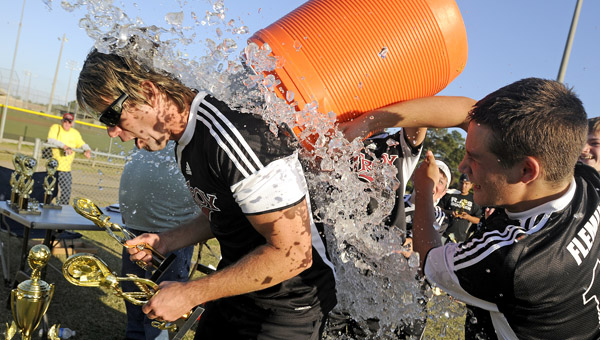 It was a banner year the for Troy Recreation soccer teams in 2010.

Not only did a record seven teams play for a state championship this past weekend in Dothan, but an all-time best, four teams returned home with the coveted trophies.

The 18-and-under, 15-and-under, 13-and-under and 11-and-under girls teams all were the last standing, as each team added on to its legacy, while others were fulfilling goals years in the making.

“To my knowledge we have never had four teams win state in one year,” Troy Parks and Recreation Director Dan Smith said.

“We were all very excited with how the teams played. I think the community is very blessed to have the kind of parents and coaches that we have here. They all have really made a great effort to helping get the soccer program to where it is. Three coaches in particular, Doug McLendon, Ken Labrant and Olaf Lieb have all put a lot of time and effort into soccer here and to see it rewarded like this is really wonderful.”

For McLendon, it was double the fun, as he was the head coach for both the 18U and 15U teams.

After the 18U team swept through both Prattville and Dothan, the team took out Eufaula, 1-0 in the championship round Sunday afternoon.

Like the older group, the 15U team sprinted past its competition, defeating Prattville, Ft. Rucker and Eufaula by a combined score of 24-4.

It was the first time in two years that both teams won the state championship, and just like then, McLendon was the coach.

“I never thought I would see that again,” he said. “But I am very happy that both were able to pull it off.

“It’s really a testament to the kind of talent and the determination the kids have. They came in without any kind of practice against another opponent and they really played well.”

While both teams walked away on top, both did it different ways, according to McLendon.

“The younger team was really kind of relaxed going in and that was something that I was concerned with. We got behind early in our first game, but it didn’t affect them at all. They played like they were in control of their games all the way through,” he said.

“The older guys had a lot of confidence coming into the tournament. They never really struggled against some really good competition, because they all knew that they were going to win.”

“It really was an overwhelming feeling,” McLendon said about the victories. “It was something that was very special to be a part of.”

The 13U team was able to experience that same special feeling thanks to its sweep over the weekend.

The team defeated Prattville 4-2, Jacksonville 10-0 and Russellville 4-1 in the championship to claim its first state championship.

But the win was one that was several years in the making.

The past three seasons, the boys that made up the 13U team had finished runner up in the state tournament – making Sunday’s win all the more sweeter.

“It was really a relief to be honest,” Labrant said of the championship win.

“For so many years, the guys were so close and to cap it off like this was really something special. They raised their level of play over the weekend. Everything clicked for us – we really played well as a team.”

The last time the age group won a state championship was four years ago.

“You could tell they all wanted to win (the championship),” Labrant said. “I’m very proud of all the guys.”

Last but not least, the 11U girls also etched their names into history as well, as they two claimed their first state championship as well.

“We had a great group of girls,” head coach Tim Bobo said. “We are all really excited about it.

“A lot of work in the three weeks prior. All the girls were very excited, which was good to see.

“For me, it was an honor to coach the girls and to watch them play as a team. They are all fantastic kids, all positive young ladies,” the coach added.

Neither or Troy’s opponents scored, as the team beat Dothan 1-0 and Prattville 3-0.

The other teams competing in the respective tournaments were the 9-and-under girls and boys and the 11-and-under boys.

“For us to win as many championships as we did this weekend, against some cities that have had teams for much longer, really speaks a lot about what we have developing here in Troy and for that we are all extremely proud,” Smith said.

The Troy Parks and Recreation Youth Sports Coordinator, David Dickey, said this was a very proud moment for all the Troy players, coaches and families.

“I think all the kids played really well,” Dickey said.

“Got to give a lot of credit to all the coaches as well, they had each team at state ready to play. They all made us really proud. I think every team represented Troy very well and every team played hard. We have a very competitive program growing here and it is one that I hope continues to grow and get better for many years to come.”