‘They just outplayed us’ 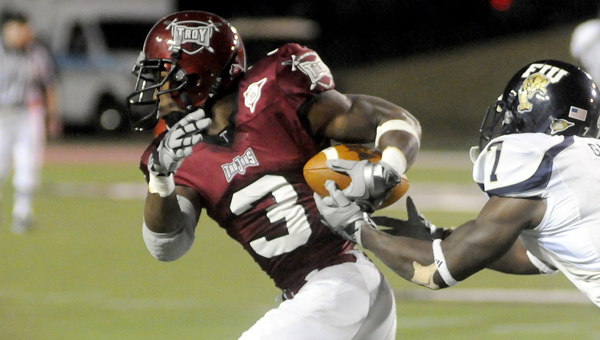 Troy's Jerrel Jernigan (3) runs the ball past Florida International's Anthony Gaitor (7) during the second half an NCAA football game in Troy, Ala., on Saturday, Nov. 13, 2010. (Messenger Staff Photo/Thomas Graning)

Homecoming 2010 will be long remembered as a historic day for the Troy Trojans.

Unfortunately, for all the wrong reasons.

As the Trojans played host to the Golden Panthers of Florida Atlantic, the Sun Belt Conference championship was hanging in the balance.

All-time, Troy was 6-0 against the conference opponent coming into the game, however, that was not the case as the Golden Panthers came away with a dominant performance resulting in a 52-35 win and the inside track to the conference championship.

“I don’t have too much to say,” head coach Larry Blakeney said. 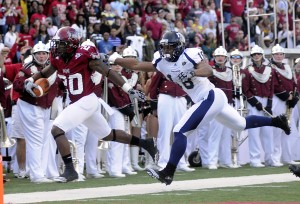 Troy running back Shawn Southward (20) is pushed out of bounds by Florida International cornerback Kreg Brown (18) during the first half an NCAA football game in Troy, Ala., on Saturday, Nov. 13, 2010. (Messenger Staff Photo/Thomas Graning)

“I knew (FIU) was a pretty good team but it didn’t look like we tackled at all (Saturday). We have a lot of work to do.

“They did a great job of scheming us. Every time it seemed like we had some hope, they got us again. We got it to 10 points there late and they came right back and scored comeback. They killed us running the football.”

The loss drops the Trojans into second place in the conference with 4-2 record, 5-4 overall, while the Golden Panthers improve to 4-1 and 4-5.

This was the first time the Trojans were defeated on a homecoming weekend in 13 years as the last team to do so was Northwest State back in 1997.

The last time the Trojans failed to walk off the home turf with a victory came back in the 2007, when another Florida conference foe, Florida Atlanta, defeated the Trojans at then Movie Gallery Veterans Stadium.

For the better part of the first half, the Trojans found themselves in an unfamiliar position – playing catch up.

Rarely have the Trojans trailed by double-digits at home, but that’s exactly the position the Golden Panthers had Troy in thanks to several big plays, most notably by T.Y. Hilton.

And while Trojan wide receiver Jerrel Jernigan has received a lot of praise as one the top players in the conference, Hilton made his case for why his name named should be mentioned as well.

Against a Trojan defense, that came into the game No. 1 in the conference in run defense, the junior running back rushed for 166 yards on just six carries, adding two touchdowns.

Along with Hilton, the Golden Panthers had two other 100-yard backs, as Darriet Perry led the way with 187 yards and a score while Darian Mallary finished with 118 yards and a touchdown.

The 448 rushing yards in the game was the most in program’s history. 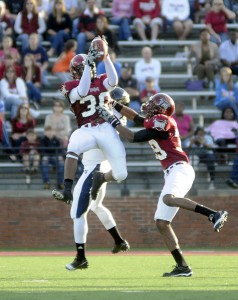 “We didn’t look very good first off,” defensive coordinator Jeremy Rowell said. “We just could not tackle at all.

‘It seemed like early on in the game it seemed like (FIU) had a good play, good play and then a big play. Every time I had a blitz package, they beat us.”

Florida International finished just four points shy of a program record for most in a game.

The last time a Trojan defense gave up 50 or more points in a game was back in 1961 when Howard College put up 80.

“They really have a good team, and now they are the odds on favorite to win the league,” the coach added.

After a rather dull first quarter scoring wise, 52 points were scored in the second quarter – 31 of which were scored by the team from South Florida.

A Jack Griffin field goal got things started for the Golden Panthers, and in the next 14 minutes, Florida International scored five touchdowns highlighted by an 80-yard run by Hilton and a 52-yard pass and catch from quarterback Wes Carroll to Greg Ellingson.

In that quarter, the Golden Panthers had 280 yards of total offense and those 31 points scored were the most ever allowed by a Larry Blakeney coach team.

That kind of productivity could not be said for the Trojan offense, as it shot itself in the foot twice thanks to two fumbles.

Down 31-7 with just a little over two minutes in the half, the Trojans were finally able to reach the end zone twice, thanks to a Shawn Southward rushing touchdown and a receiving touchdown.

But at the half, Troy found itself trailing by 17.

That lead would be extended in the opening moments of the third quarter.

After the Trojans stalled on their first possession, it was again Hilton who left the home team in the dust, this time thanks to a 61-yard touchdown.

But that would be the only score for Florida International, as it was Troy who won the scoring battle in the third quarter.

A 39-yard touchdown pass from Corey Robinson to Jamel Johnson and a nine-yard rushing score by DuJuan Harris brought the Trojans to within 10 points with one quarter left in the game. 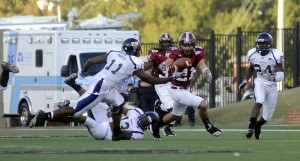 But that would be as close as the Trojans would get.

With nine minutes left in the game, Carroll found Jon Faucher for a 23-yard score, to push the lead back to 17 points, and ice the game.

The loss is the Trojans’ second in conference play, which is the most since 2005.

“They came to play and we started off slow,” Jernigan said.

“They had a lot of team speed and a lot of playmakers offensively – they executed well.”

While nothing else went well for Troy, Jernigan was able to make history of his own, as he became the conference’s all-time record holder for most career catches and broke the school’s 40-year-old record for most career reception yards.

But that was none of the senior’s concern following the loss.

“This one was tough,” he said.

“(FIU) is No. 1 in the conference now, hopefully, we can get some help for others teams, if not, we will try and play for a bowl game.

“We got to come back to work ready to play tomorrow and prepare – that’s all I got to say.”

The wide out finished with 10 catches for 32 yards, his lowest since the Louisiana-Monroe game when he finished with 27, and rushed for 19 yards on three carries.

The Golden Panthers finished with 668 total yards of offense, the most the Trojans have allowed all season long. 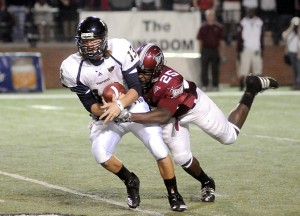 “Us as players have to play with more urgency and as you can see, when suffered for it (Saturday night).

“I want to apologize to all of Trojan Nation for what happened in that game. I believe that didn’t have the best week of practice leading up to the game, but we were still confident and prepared going into the game. They just outplayed us.”

Click here to see more photos from the game.