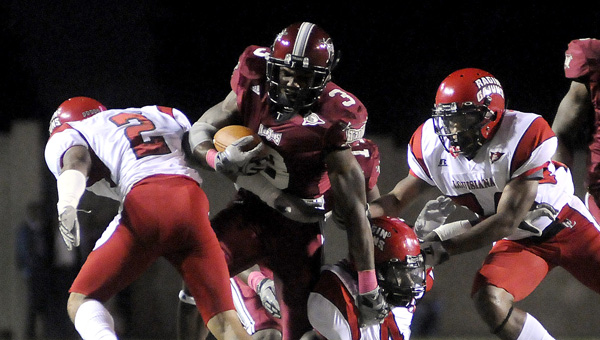 The only thing that can cure a loss is a win the following week.

As the Troy Trojans returned home late Saturday night from Denton, Texas, that’s exactly what they had.

After dropping its first conference loss in two seasons to Louisiana-Monroe in the last weekend of October, the Trojans got back on track in November with a 41-35 win over North Texas.

“(North Texas) have certainly circled the wagons since the coaching change and gave us all that we could handle. I thought it was certainly a great effort by our guys and hopefully a confidence booster for us as well. It was a great win for the Trojans, and one that sets us up for a team that is really playing well right now in Florida International.”

The Golden Panthers of FIU will enter the game with just a 3-5 overall record, but its their conference record that makes Saturday’s game that much more important, as they are currently 3-1, which is good enough for second place.

All the Trojans need to clinch at least a share of the conference championship is a win in one of the next two Sun Belt games.

However, with Homecoming festivities taking place on Saturday, Troy will be looking to wrap things up sooner rather than later.

“Hopefully, (winning the conference) will give us the motivation we need to get the job done,” Blakeney said.

“We look forward to a good week of preparation, which is vital. I think everyone on this team knows the magnitude of Saturday’s game.”

With it being Homecoming and a game featuring the top two teams in the conference, Blakeney said he hopes to see all of Trojan Nation supporting the team in cardinal.

“With the Homecoming game, hopefully you have your best crowd of the season there, and that’s what we want,” the coach said.

“We want a big crowd on hand for Saturday’s game, hoping we get a record attendance. Our part in the whole thing is to get a win. Hopefully, we can have an all around good weekend.”

Along with the win this past Saturday, one Trojan had reason to celebrate for more than just the victory.

Against the Mean Green, wide receiver Jerrel Jernigan moved past Tyrell Fenroy of Louisiana-Lafayette for conference’s all-time leader in all-purpose yards with a 55-yard run.

But the senior is not done just yet.

Jernigan will be looking to make his last Troy Homecoming a special one, as the offensive threat is just four catches and 17 receiving yards away from breaking the 40-year-old school career record.

“It feels good to get the record especially with the win,” Jernigan said Monday.

“Everyone always jokes about how it seems that I have been at Troy, but to me, it has gone by so fast. I can still remember coming in as a freshman and now, it’s almost done.”

Trojans aim for bounce back from rare conference loss

For the first time in two years, the Troy Trojans will be entering a Sun Belt game coming off a... read more