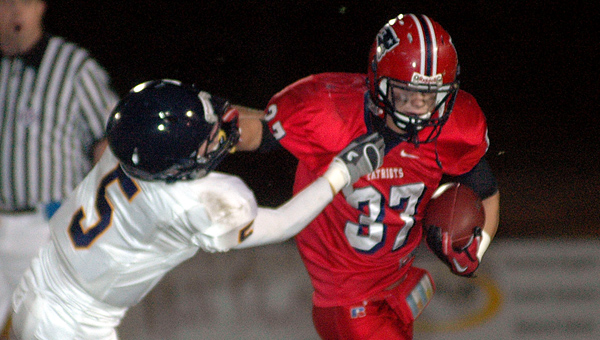 In the final tune up before the first round of the playoffs, the Pike Liberal Arts Patriots played host to Tuscaloosa Academy.

Right from the start, the home team showed that they are ready for what is to come in the following weeks, as the Patriots had a 20-point lead after the first 12 minutes, going on to win 33-7.

“I really expected this to be a tough game for us,” Patriot head coach Steven Kilcrease said. “Especially with the players we held out.

“But I was really proud of how our guys played (Friday night). I thought our backs had a great game and I thought we threw the ball well. We did a lot of really good things in the first half.

The win improved PLAS to 8-2 overall, making it three-straight seasons that the team has won eight or more games in the regular season.

Despite having both running backs Nick McLaughlin and Taylor Stephens out, the Patriots wasted little time to reach the end zone, as players replacing those starters, Taytom Barnes and Kyle Boswell, led the PLAS charge.

Boswell put PLAS on the board first, thanks to a nine-yard touchdown run and on the team’s next possession, quarterback Blake Floyd put his team up 14-0 after a 22-yard run.

Floyd was not done however.

On the ensuing Knight possession, Floyd forced a fumble allowing senior Evan Strother to recover and in the process, give the Patriots the ball.

After fighting off a second and 25 thanks to back-to-back holding penalties, Barnes would cross the goal line from 11 yards out to give PLAS a 20-0 lead in the first quarter.

The PLAS offense would not stop there.

Just four plays into its first possession of the new quarter, Floyd and Strother again played off one another, this team with a 62-yard pitch and catch that had all the Knight defenders playing catch up.

Not to be out down, the Patriot defense stepped up as well.

“There no way I was not going to score,” the senior said. “As soon as I caught the ball, the first thing I thought was ‘get in the end zone’”.

That would be the last time a team put points on the board until the very end of the third quarter when Tuscaloosa got its only score of the game, to make it 33-7.

“In the second half, (Tuscaloosa) began to blitz a lot, which kind of slowed up down,” Kilcrease said.

“I thought we didn’t play as well as we could have played and that was a little disappointing. But overall, I was happy with the win. We made it out fairly injury free to, which is always important.”

For the game, the Patriots finished with 355 yards of total offense, 208 of which came in the rushing category.

Barnes led all rushers with 102 yards on 18 carries, while Floyd and Boswell finished with 47 on seven carries and 44 on five carries, respectively.

“I was looking forward to this game for a while,” Barnes said.

“I knew I was probably going to get a lot of carries and I wanted to make the most of them and help the team out as much as possible.”

The PLAS defense held the Knights to 241 total yards, and seven first downs.

As for the Patriot running attack, Kilcrease said both Barnes and Boswell had great nights.

“We have seen them run hard in practice and in late game situations and (Friday night) I thought both did a tremendous job for us. They let us continue to do what we do, which is run the ball. We had some guys out with injury and they came in and filled those spots. They both had big nights for us.”

Now, the Patriots will begin preparation to defend its back-to-back AAA AISA Region 1 starting off with Prattville Christian this Friday.

“We did a lot of good things right (Friday night) but we had some miscommunication issues with the defense that could have really hurt us, so we will be trying to fix that in the upcoming week,” Kilcrease said.

“We will be getting everyone back healthy to, which is a big thing. We got some work to do, but I think this win was a big one for us and hopefully we can use to next week.”