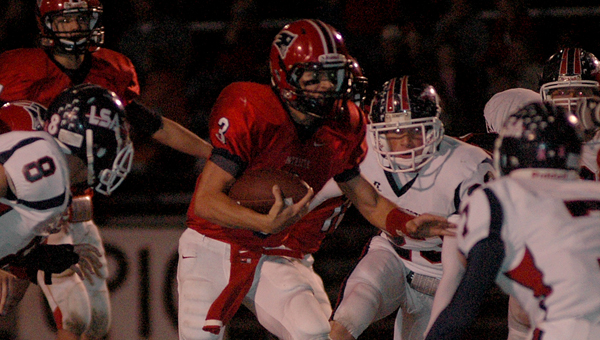 The last time the Patriots of Pike Liberal Arts played a game on DeWight Ward Field, the team walked off devastated.

On Friday night, the Patriots and their fans were walking off the field with the exact opposite reaction.

With the No. 3 spot already secured in AAA AISA Region 1, PLAS came into its game against rival Lee-Scott looking to stay on track, and that is exactly what it was able to do, thanks to its 21-6 win.

“This was a good win for us,” Patriot head coach Steven Kilcrease said. “You always want to win region games.

“Lee-Scott is a good team, better than their record says. We didn’t play maybe as good as we can play, but we still played good enough to get the win.”

The win improved PLAS to 7-2 overall and ended its region play with a 4-2 record.

PLAS would put points on the board in its second possession, after a 54-yard Evan Strother punt return put his team in Warrior territory.

On the Patriots’ next possession, Floyd would again get his team in the end zone, this time using his arm, as he found Martin Meeks on a nine-yard pitch and catch, giving the home team a 14-0 lead just two minutes and 26 seconds into the second quarter.

Lee-Scott would score its only touchdown on a trick play when wide receiver Jake Folmar hit Tyler Reynolds in the back of the end zone, to cut the lead to 14-6.

In the second half, the Patriots made sure it this home game would not get away from them the way the last did, and so the team did what it does best – run the ball.

Of the 27 offensive plays in the final two quarters, 26 were running plays, highlighted by another touchdown run by Floyd, this time from five yards out, to give his team a 21-6 lead and the win.

“I thought we did a pretty good job throwing the ball (Friday night),” Kilcrease said.

“Martin Meeks had a couple good catches and Blake made a couple good throws. But at the half, I told the guys we were going to be run heavy the rest of the game.

“I thought our running backs did a great job with the ball tonight. Both Kyle Boswell and Taytom Barnes had really good games for us. And to see some of the younger guys step up for us when some of our big players were out with injury was great.”

In the third quarter alone, the Patriots had the ball for 17 plays and 54 yards, while the Warriors ran just seven plays for 22 yards.

While the Patriot running game was working on all cylinders, there was something holding the team back every now and again, and it wasn’t the Warriors.

Throughout the game, PLAS committed several penalties, four of which were 15-yard personal fouls.

“Penalties were a big negative to this game,” the coach said. “And they came from players who don’t normally make them.

“That’s an area that we still have to work on going into the playoffs. We can’t commit those kind of mistakes against a team like (first round playoff opponent) Prattville Christian.”

The Patriots offense finished with a total of 240 yards, with Floyd rushing for 77 on nine carries and two scores and passing for another 55 and a touchdown.

The quarterback also threw and interception and lost a fumble.

“I would be better if I had a better game,” Floyd said following the game.

“I made a few more mistakes then I would have liked. I panicked when I got under pressure and I can’t do that.”

“Even though we had everything locked up for the playoffs, this was still a game we needed. This was a region game and one against a rival of ours. It was a big win and one that we will be able to get better off of.”

Running back Taylor Stevens missed the game due to an ankle injury and after being hit in the shoulder early in the first quarter, Nick McLaughlin saw limited action the rest of the game.

“Both guys are going to be back for the playoffs,” Kilcrease said.

“Nick would go in for a few plays at a time, sort of spot play. He has had this injury for a while now and will continue to play with it for the rest of the year.”

While the win was big for multiple reasons for the team, it was big for Kilcrease for one more reason – Lee-Scott was the team he left for PLAS.

“I got a lot of friends over there,” Kilcrease said. “I love a lot of those guys to death. Anytime we play each other, its one of those games were you never want to see a team lose, but it always feels good to walk away with a win.”

The Charles Henderson Trojans have a lot to be excited about right now. With the win over Carroll last week,... read more