Patriots in playoffs, prepare for Lee-Scott 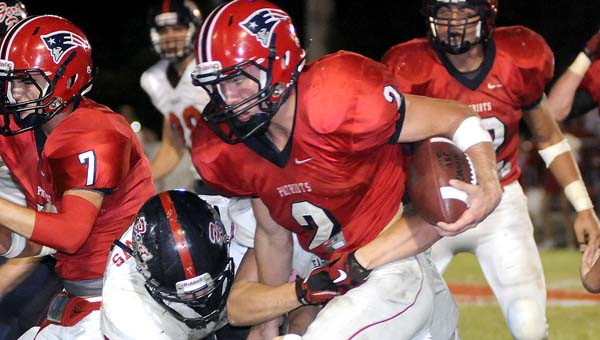 Coming off a devastating home loss to Fort Dale, the Patriots were able to regroup on the road this past Friday with a win, over then third place Glenwood.

The 34-20 victory continued a PLAS trend this season, as all six wins have come by double-digits. More importantly, the win improved the Patriots AISA AAA Region 1 record to 3-2, which helped the team clinch third place behind Monroeville, 5-0, and Fort Dale, 5-1.

While PLAS secured its right to defend its back-to-back state championships, it is going to do so on a different path than the one taken during the previous two championship runs.

With the third spot, the Patriots will not host a playoff game.

But that is not a concern for Steven Kilcrease and his team.

“It’s a good feeling to have a playoff spot locked up right now. At the beginning of the season, I hoped that we would be in this position at this point in the season.

“As far as playing on the road, I think we have done pretty well on the road this year, with the exception of the Monroe loss. Road games really don’t seem to faze these guys.”

The Patriots are 4-1 on the road, with the lone loss coming from Monroeville.

That loss was also the first PLAS had suffered in nearly two seasons.

As for the opening round of the playoffs, PLAS will travel back up to Prattville to face off against Prattville Christian, a team the Patriots defeated earlier this season, on the road. But for now, PLAS is focused on the task at hand, and this week rival Lee-Scott comes into town.

“They are a real young team, but they are still a good team,” Kilcrease said. “They got some playmakers.

“They are very good up front, I think the best there with the exception of Monroe. Those guys go after it, they play hard and are disciplined. And that’s what I expect from them on Friday night.”

Until recently, the Warriors have gotten the best of the Patriots, as the team from Auburn won three-straight games from 2006 through 2008.

It was that win Kilcrease said was key to the Patriots’ season, as it really got his team going in the right direction.

A season later, the coach believes his team got the same kind of win last week.

“I was really concerned about the Glenwood game,” he said. “We had a tough loss that was followed by fall break, so we really didn’t know what to expect in that game. But the kids responded in a big way. We had a great week of practice leading into the game and it carried over – the Glenwood win was probably the biggest win of the season.”

That win has carried over into this week as well, according to the coach, as he said the team has had some of the best practices it has had all season long the past couple of days.

“There is definitely a little excitement in the air,” he said.

Another reason the team has much to be excited about is because of how its schedule looks the rest of the regular season – all home games.

The trip to Glenwood would be the last time PLAS would hit the road in the regular season as the final two games against Lee-Scott and Tuscaloosa Academy will take place on DeWight Ward Field.

“This team has really come together in the past couple of weeks,” junior quarterback Blake Floyd said during the team’s practice.

“We made some mistakes in a couple of games and really needed to get better and we did that and are still working on that. We wanted to go to the playoffs, we wanted the chance to compete for another championship and we go it. Now, we just have to continue to play the way we all know we can play.”

While the Patriots may be turning things around, it will continue to do so without one of its seniors and biggest contributors.

After grabbing an interception against Glenwood, Sam Carroll was hit on the left arm by a defender’s helmet, breaking both bones and ending the season for the tight end.