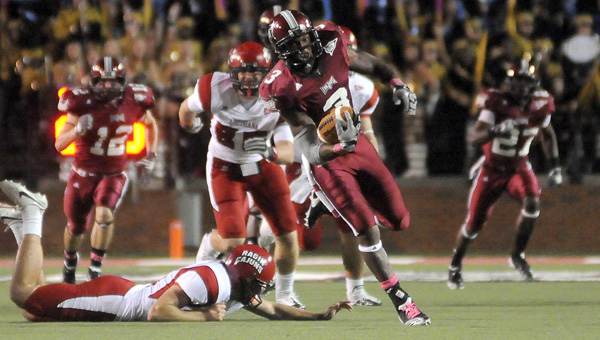 That was the case Saturday night in Veterans Memorial Stadium and the Troy Trojans played host to the Louisiana-Lafayette.

The Trojans were able to overcome five turnovers and sloppy play on both sides of the ball, as they outlasted the Ragin’ Cajuns, 31-24. The win improved Troy to 4-2 overall, and kept the team perfect in Sun Belt play at 3-0. 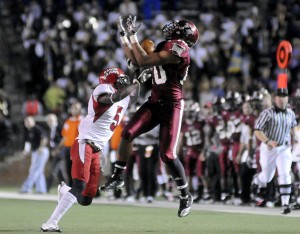 “This was a weird game,” head coach Larry Blakeney said following the win. “We knew it would be tough. (ULL) puts fourth a great effort every year, I knew they would be prepared.

(Head coach Ricky Bustle) had his guys read to go right from the start, and we definitely helped them a lot with turnovers and penalties. We tried our best to not win, but somehow we won – and that’s a good sign.”

The lone touchdown in the quarter came on a Brad McGuire one-yard run. Troy would respond mere moments into the second quarter, as Shawn Southward would cap off a 69-yard scoring drive with six-yard run to the back of the end zone. ULL would again take the lead, thanks to another McGuire one-yard run, to make the score 14-7 midway through the second. 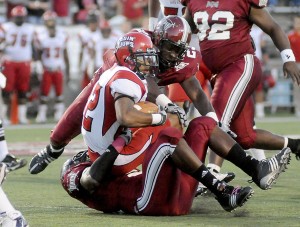 A little less than five minutes later, Michael Taylor would sink a 26-yard field goal to cut the lead to 14-10, but the Trojans were not done scoring points just yet. After forcing a ULL punt, senior wide receiver Jerrel Jernigan got the fans on the their feet with a 75-yard punt return for a touchdown, giving his team a 17-14 lead in the process.

The score would remain the same until the fourth quarter, when things got interesting for both teams.

The Ragin’ Cajuns would strike first, with a Masson five-yard pass to Marlin Miller to regain the lead, at 21-17.

After ULL again had the ball deep in Trojan territory, the defense showed up, as Emmanuel Dudley forced a Masson fumble that was recovered by Bryan Willis and returned to midfield. 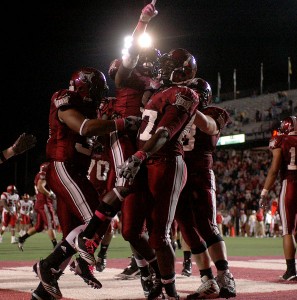 Just 33 seconds later, the newest quarterback on the Trojan roster, Jonathan Chandler, found Jason Bruce on a Trojan trick play that was good for 34 yards, a touchdown and a 24-12 lead with a little over nine minutes left in the game.

While Robinson may have struggled all throughout the game, the red-shirt freshman came through when it mattered the most.

With a little under five minutes in the game, Robinson found a wide-open Jernigan for a 12-yard touchdown pass that would put Troy up for good at 31-24. “I had terrible game (Saturday night),” Robinson said afterwards. “But I saw Jerrel and throw it to him and he got in the end zone. I couldn’t believe how wide open he was, but I was pretty happy when he (got in the end zone).” 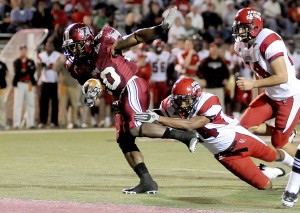 Robinson finished with 271 yards and a touchdown, completing 25-of-35 passes, but also threw career-high three interceptions.

“I would like call them freshman mistakes, but I am not going to make excuses for myself,” he said.

“I got to do a better job of decision making and correct my mistakes. I stunk it up but thankfully, our defensive was able to make some plays and keep us in the game, and I think Jonathan’s pass really changed the whole game in our favor.”

As a whole, the Trojan offense only had 380 total yards of offense, 109 of which came on the ground.

“This was a win we had to fight for,” said Jernigan, who finished with six receptions for 77 yards and a touchdown. “It didn’t come easy for us, but we found a way to win.” Even though the Trojan defense allowed 24 points and 350 yards of offense, it was the turnovers that held the Ragin’ Cajuns back.

There weren’t a lot of adjustments going on during the first half,” sophomore defensive end Jonathan Massaquoi said. “As a defense, we knew what we had to do and we rallied around each other. “Offensively, (ULL) didn’t really do anything surprising, we just had a few mishaps early on in the game. “But to be at 3-0 right now is what we as a team expected,” he said. “It’s nothing new, these wins are supposed to happen. Now, the bull’s-eye on our chest is going to get bigger, and we have to be ready for it.”

That aforementioned bull’s-eye will indeed get bigger, as Troy has now won13-consecutive conference games, as it heads into its bye-week before taking on Louisiana-Monroe.

“I thought that if we could get through October with some wins and also get some guys healthy along the way, we would be a decent football team,” Blakeney said. “We got this far, but there is still a lot of football to be played.”