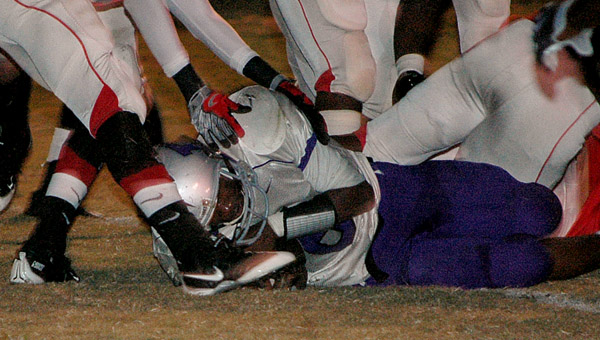 The Pike County Bulldogs came into the game with the hopes of clinching a playoff berth.

Unfortunately, those hopes were put on hold, as the Bulldogs fell short to the Luverne Tigers, 28-20.

Head coach Robert Johnson commented after the game that there was no playoff implication pressure on his team, but that Luverne always plays good. The game started out in favor of PCHS, as it went up 7-0 early on their first possession with a 7-yard quarterback keeper from senior Jerrelle Bailey which was followed by a red zone fumble recovery by Kendrick Jackson to stop a Tiger’s scoring drive.

Luverne would eventually score on a later drive, not to be outdone though, PCHS would drive 85 yards to score on a one-yard touchdown run, again by Bailey ending the first quarter with PCHS up, 14-8. The second quarter started with another drive-stopping fumble recover by PCHS, this time by defensive back Denzell Patterson. The Bulldogs could not convert that turnover into points however. Luverne would get the ball back and score on a 40-yard touchdown pass to tie the game at 14-14.

PCHS, with 1:34 left in the half, was able to drive the ball down and score on a Bailey pass to wide receiver Quadry Greasham taking the lead into the half at 20-14. Luverne received the second half kick off but did not have the ball long as linebacker Jeremy Rumph had a fumble recovery, the third of the game for the PCHS defense. Once again, the Bulldogs could not execute on offense and had to punt the ball. Luverne took the opportunity and ran with it, eventually scoring and taking the lead, 21-20. Midway through the fourth quarter the Bulldogs were driving down the field with an opportunity to score but could not convert on a fourth down fake punt run, giving the Tigers the ball back with 7:26 left in the game. Johnson noted that and called an unusual play, he told his defense to let Luverne score. The next play Luverne scored on a run, taking the score to 28-20, but giving the PCHS Bulldogs a chance to tie the game with 1:36 left. PCHS attempted to drive down the field but was unsuccessful, Bailey went out due to an ankle injury, as Marlon Meadows threw an interception to end the game at 28-20.

“There was no other choice, I had to give our offense a chance, it just didn’t work,” Johnson said after the game. “We just have to play more physical and focus on the little things like penalties,” the coach added.

Next week the Bulldogs will face off in another regional road game at Geneva.

As far as Jerrelle Bailey’s injuries, a stiff neck and a beat up ankle this week, coach said that he is banged up but will be good to go next Friday.