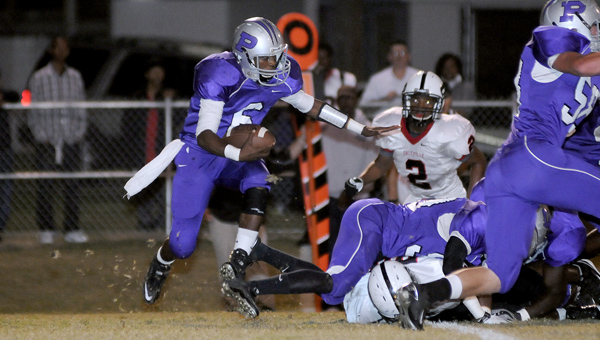 Pike County is hoping the third time is the charm today.

For the third time in three seasons, a pair of Bulldogs will face off on the gridiron.

However, it has not always been a fair fight.

The Pike County Bulldogs will look to extract a little revenge tonight when it travels to Luverne to take on a foe that has ended its run at a championship the past two seasons.

Now, for the first time in half a decade the two teams will meet during the regular season, as each is trying to solidify a playoff spot.

“This is a game we need,” PCHS head coach Robert Johnson said. “A win puts us in the playoffs and that is something that we have been playing for all season long.

“But it’s not going to be easy going up against a very good Luverne team,” he added.

LHS enters the home game with a 3-4 overall record, however, the Bulldogs are 2-1 in 3A Region 2 play.

That region record is just a game behind PCHS, who enters with a 3-1 record, 5-2 overall.

That one loss for the Bulldogs of Pike County took place last week against Daleville, who currently stands atop the region standings.

The 30-27 loss was the first region loss PCHS has suffered in two seasons, and while it may have been a bit of set back for the Bulldogs, Johnson said it was not devastating as far as the season goes.

“No regular season loss is going to have any real effect on us. Obviously, we don’t want to suffer a loss at any point in the season – every team wants to be undefeated. But (losses) are going to happen. I think this week has been very productive for us, the guys have come back ready to play. Our seniors have been very vocal as well, a lot of them have stepped up, asking what more they can do for the team, and to see that as a coach is very impressive.”

During the Daleville loss, senior quarterback Jerrelle Bailey was injured towards the end of the game, and taken to a hospital in a stretcher.

However, despite some reports, Bailey did not receiver a concussion, according to Johnson, and was only treated for a bruised neck.

The senior was held out of contact drills during the week but did participate in throwing and running drills and will be ready to play tonight.

As for the opposition Bailey and his teammates will be facing, Johnson said his team needs to be ready for a tough game.

“Luverne is very big and very fast. They are going to run the football right at us and they have a lot of guys who can do that and do it well.

“They are going to be tough to handle, but hopefully, we are up to the task,” the coach said.