Patriots hope to bounce back 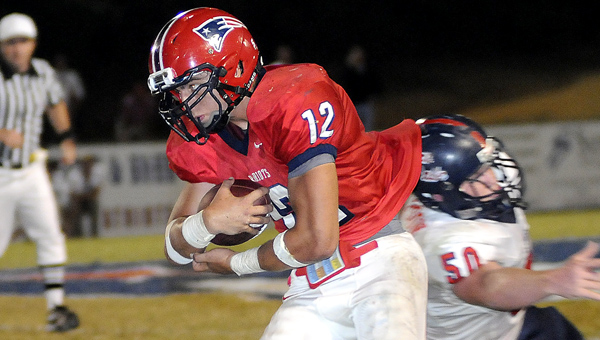 For the first time in three seasons, the Pike Liberal Arts Patriots have been dealt two losses in a season.

The first took place on the road against currently unbeaten Monroeville Academy back in week three, but the second took place at home against bitter rival, Fort Dale.

It was that loss that the Patriots were just 29 seconds away from claiming as a win, however, a 94-yard Eagle scoring drive changed all of that, leaving both the home team, and it’s fans, heartbroken, as FDA won 27-26.

Now, PLAS will look to try and overcome that loss as it hits the road again this Friday against another tough AISA AAA Region 1 opponent in Glenwood.

“We have had a pretty good week of practice this week,” Patriot head coach Steven Kilcrease said Wednesday evening.

“They guys have responded pretty positively to (the FDA) loss. We watched a lot of film from that game Monday. There were so many little things that had we done correctly, the outcome would have been different. The guys know that and now we are working on getting better, we are working on us.”

Against the Eagles, the Patriots fumbled the ball five times, losing only one in the first quarter alone.

But off that opening kickoff fumble, FDA found the end zone in just four plays, putting PLAS in an early hole.

“We started off the game bad and the rest of the way, it felt like we were playing from behind the entire game,” Kilcrease said.

“Every time we had a opportunity to capitalize, we didn’t and every time Fort Dale had an opportunity, they responded. Football is a game of inches, as we were unable to get those inches.”

On two different occasions, the Patriots were facing a fourth-and-goal from inside the Eagles’ five-yard line, but were turned away from the end zone both times.

“It was no one person not doing their job, it was everyone. We had a bad week of practice (last week) and I am a firm believer in you play like you practice. We did not have good week of practice and it showed,” the coach said.

“But it’s week 8 and there is still a lot of football left to be played.”

While the loss to FDA was crushing, it did not put the Patriots in any danger of missing the playoffs.

It did mean however, that the likelihood of playing host to a playoff game would be very slim.

Currently, the team is sitting with a 2-2 region record, which good enough for fourth place behind Glenwood, who is 3-2, FDA and Monroeville.

With a win this Friday, the Patriots would be able to take over third place, replacing Glenwood, as both teams have identical records at 5-2.

“This is another tough region game for us,” Kilcrease said. “And one that we have to win.

“They have a lot of good athletes, and they can get a lot of penetration with their front four (on defense). We are going to have to be physical both on offense and defense if we want to win, no doubt about it.”

The Patriots have beaten the Gators four out of the last six times the two teams have met.

“I think both teams are pretty evenly matched going into the game,” the coach said.

“It’s going to come down to who can do the little things better. Who can tackle and block better, who doesn’t miss their assignments.

“I think the FDA loss is something that is going to motivate our guys to want to play their best and to get a win,” Kilcrease added. “Hopefully, that will be the case on Friday.”