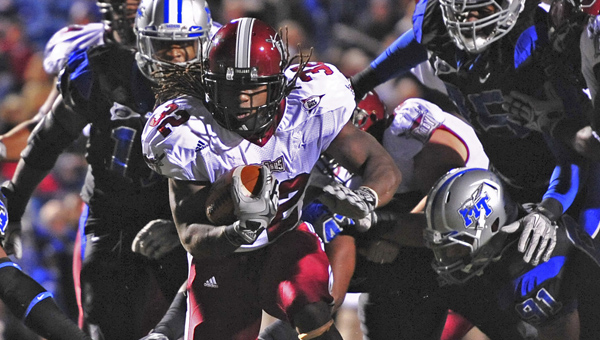 Things are back to normal for the Troy Trojans this week, as the team is coming off a two-week stretch where it only played one game.

However, that one game was a big one.

In the national spotlight, the Trojans dismantled the pre-season pick to win the conference, Middle Tennessee State University, on the road, crusing to a 42-13 victory.

“I’d lying if I said we got what we were expecting,” head coach Larry Blakeney said about the Middle Tennessee game to start off Monday’s press conference.

“Now, don’t get me wrong, we were happy we got what we go, but I don’t think we expected to win the game the way we did.

“We came in with a lot of questions defensively – we had a lot of injuries going on. I thought we were playing well on (special teams and on offense) but I think the kids and the coaches prepared well for the game,” he added. “We had good focus all week, and we played like a full team with focus. It was our best defensive performance of the season.”

While the offense shined for all four quarters, it was the defense that really stole the show, as Troy held MTSU to just 207 total offense yards and two scores, the lowest for both in the team’s five games so far this season.

“The defensive made some plays,” Blakeney said.

“Kanorris (Davis) and Jacoby (Thomas) were energy guys for us and I think everyone saw the rest of the defense feed off of those two guys.

“I think things are starting to click for us.”

Davis, who made his first career start against MTSU, finished with tackles and a forced fumble and was named Sun Belt Defensive Player of the Week, while Thomas finished with two sacks.

“We had a great performance,” defensive end Jonathan Massaquoi said.

“(The defense) spoke amongst ourselves before the game, and we said he had to get it done. Now, we have to continue to play at a high level.”

While the Trojan defense may be figured out, the MTSU game left Troy with another question, this time on the opposite side of the ball – who will back up quarterback Corey Robinson?

Junior Jamie Hampton, Robinson’s backup, suffered a compound fracture in his lower left leg early on in the second quarter of the game, after an eight-yard run. The injury required season-ending surgery, which successfully took place the following morning in Birmingham, leaving the Trojans to make some important decisions including bringing back a familiar face.

Troy has reactivated former Trojan quarterback, Tanner Jones, to the team to help fill in the position. The last time Jones saw action was 2008, and in the two seasons he played, 2007 being the other, the quarterback finished completing 20-of-42 passes for 225 yards, adding two touchdowns and a interception.

“Jamie has that winner persona,” Blakeney said. “He is as good of a kid as I have ever coached, and there have been a lot of them.”

The other quarterback the Trojans have is Greg Jenkins, however, he is currently being red-shirt.

The 6-foot-2-inch, 210-pound Jenkins is in his first season with the Trojans, after transferring from Mississippi Gulf Coast Community College.

“We would really like to keep Greg as a red-shirt. But he is the key in all of this,” Blakeney said. “If our coaches think he is good and ready, we will take the red-shirt off. I know Greg will do whatever he is asked to do and I trust our coaches with the decision making process for this.

“Right now, if we had to have a quarterback in there to finish a game, it would be Tanner,” the coach said.

Blakeney also mentioned that Jerrel Jernigan, DuJaun Harris and Jonathan Chandler, who have all seen time at the quarterback position, would be viewed as possible solutions.

“I’m fine (with taking snaps as the quarterback) Jernigan said when asked. “It if helps the team, I will do it.”

Jernigan said he is still not 100 percent from his minor elbow injury that took place the Saturday before last Tuesday’s game, but said he expects to get the stitches out before this Saturday’s home game against Louisiana-Lafayette.

As for Robinson, the quarterback was named Sun Belt Offensive Player of the Week, thanks to his 259-yard, three-touchdown performance against the Blue Raiders.

“I can’t do it alone,” he said. “The offensive line has done a tremendous job and I am surrounded by fantastic skilled position guys.”